(CNN) -- Comedian and TV host Stephen Colbert has warned NASA to name a new wing of the international space station after him or he would "seize power as space's evil tyrant overlord." 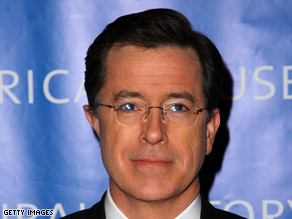 A NASA spokesman said the U.S. space agency is aware of Colbert's threat, issued Monday night on Comedy Central's "Colbert Report," but no decision will be made on the node's name until next week.

Colbert topped NASA's online poll soliciting names for the wing, with 230,539 of the more than 1.1 million votes cast, according to NASA spokesman John Yembrick.

The runner-up was Serenity, which Colbert said is not an appropriate name.

Serenity was the name of a spaceship in the television series "Firefly," which spawned a 2005 movie.

NASA's hedging prompted a Pennsylvania congressman to urge the agency to name the node after the comedian.

"The people have spoken, and Stephen Colbert won it fair and square, even if his campaign was a bit over the top," Rep. Chaka Fattah said.

Fattah sits on the congressional committee that oversees NASA's funding.

"NASA, I urge you to heed Congressman Fattah's call for democracy in orbit," Colbert said. "Either name that node after me, or I, too, will reject democracy and seize power as space's evil tyrant overlord."

NASA's Yembrick said he watched Colbert's show Monday, but he would not directly respond to his "evil tyrant overlord" threat.

"We think it's great that he and his audience are taking an interest," Yembrick said.

Several media outlets have reported that NASA is working on a compromise in which it would slap the droll Colbert's name on a piece of "mission essential" equipment in the new wing: the toilet.

Colbert's loyal fans, lovingly called the Colbert Nation, have in the past bombarded polls to have things named after their idol.

Thanks to them, the comedian out-polled every other name in a bridge-naming contest in Hungary. The country's government later said it cannot name the bridge after him because he does not speak Hungarian and is not deceased.

But ice-cream maker Ben and Jerry named a flavor in honor of him, Colbert's AmeriCone Dream. And Virgin America named one of its planes Air Colbert.