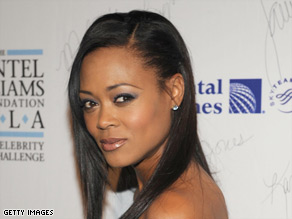 Among her guests were Robin Givens and Denise Brown. In an emotional interview, Behar examines how domestic abuse starts and why it's hard to stop.

Guest host Joy Behar: In a "Larry King Live" exclusive, Robin Givens and Denise Brown sound the warning to one quarter of all women who will be kicked, punched, raped, even killed by partners in their life times. ...

We're talking about Rihanna and Chris Brown and the allegations against him.

As you've just heard, the numbers are pretty appalling. Joining me now is someone who lived it: actress, ex-wife of former heavyweight champ Mike Tyson and spokesperson for the National Domestic Violence Hotline, Robin Givens. Greetings.

Behar: Does this Rihanna/Chris Brown [story] bring up bad memories for you?

Givens: Yes, it does.

Behar: Tell me how you've been feeling lately while you're watching this on television?

Givens: Even sitting now, you know, here with you, it shakes you up. You know, you begin to sweat. You begin to feel sad all over. ... It's hard to sit here.

Behar. You were saying to me before that it's always the same story. What do you mean by that?

Givens: I've spoken to women every[where]. ... Peoria, El Paso. ... And what's amazing is that I find that my story is their story; their story is my story -- down to the details. He dragged me down the hall by my hair. He pulled me out of bed by my panties. He would like to choke me. He would kick.

When I wrote my book, I was somewhere talking about something. And a woman came up to me and she said I wanted you to stop talking because I felt like everybody would know that you were talking about me.

Behar: Oh, boy. And it's the same progression, too, it seems?

Givens: I was hit for the first time before I was married. And I did what you thought you should do, of course. You know, you don't take any phone calls. Three days, absolutely not. Absolutely not. All of a sudden, you start taking a phone calls.

And then you're consoling them. And it just becomes, I'll never, ever, ever do it again. ... I just love you so much. It's so hard for me to handle how much I love you. And it just begins.

Behar: It must have touched you a little bit, too, like here's this big heavyweight champion crying ...

Givens: Yes. ... To see a man crying like that and promising and professing his love, I thought well, he must love me. ...

Behar: In the fall of that year, you and Mike sat down with Barbara Walters to talk about the relationship. Here's an excerpt:

Barbara Walters, host: What's it been like, this roller coaster?

Givens: It's been torture. It's been pure hell. It's been worse than anything I could possibly imagine. ... He shakes. He pushes. He swings. Sometimes I think he's trying to scare me.

Behar: That is a most interesting moment in that interview, which I've seen many times. What was going on in your head during that interview?

Givens: Well, I was so numb. Barbara knew what was going on in our lives and encouraged me to be honest. I wanted to be honest and thought it would help other people. ...

Behar: By the way, he [Tyson] was never convicted of anything?

Givens: No. ... It's interesting, though. He had done an interview somewhere. ... I don't know specifically, but [he said] the best punch he ever threw was against me and that he punched me in the head and I bounced from one wall to the other.

Behar: After the interview [with Walters], though, you stayed with him.

Behar: Why did you stay with him?

Givens: Well, he had said that he was going to get help. And I loved him. I wanted to make it work. I was very bonded. And it's hard to be bonded and save yourself at the same time.

Behar: One of the most influential women in the world used her considerable power to speak up about domestic abuse. Here's what Oprah Winfrey had to say.

You can even go one step further, Joy, and you can say if they hit you once, they'll hit you again. And if they ever threaten to kill you, eventually one day they will. ...

You know, it's the cycle of domestic violence, which is about the power and control of one human being over another -- the verbal, the emotional, the psychological abuse, you know, the chipping away at one's self-esteem.

I'm sure you heard it, Robin: you know, nobody is going to want you. I'm the best thing for you.

Brown: And then that escalates into the physical violence, which is the hitting, the kicking, the punching, throwing up against the walls. And then, of course, [comes] the honeymoon phase. And that's the 'oh, baby, I'm so sorry. It's never going to happen again.'

Behar: If you read the Internet now, there's some hostility toward Rihanna. They're saying she provoked Chris. What do you make of that?

Brown: Battery treatment programs is what people need. I spoke to a gentleman, Dr. Donald Dutton. He wrote a book, "The Batterer." He said right now, it would take three years for people that are batterers to get that mindset to change.

And I'm sure that's even more. And our society does not take it serious enough ... until, of course, there's a murder or there's a celebrity or something of that nature, which is really sad.

Givens: The one thing I'd like to say to Rihanna, actually; as difficult as this all is, she does not have to answer to the media. She doesn't have to explain it. She has to take care of herself.

Behar: Thank you all very much. Go to CNN.com/LarryKing if you have something to say about domestic abuse. If you need help, there are resources listed there for you. Don't wait. Get help now.