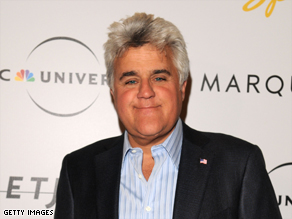 Jay Leno, host of "The Tonight Show," will play a free show in Detroit, Michigan, for the unemployed.

"The Tonight Show" host will put on a free comedy show -- "Jay's Comedy Stimulus Plan" -- next month at the Palace of Auburn Hills, which holds about 24,000 people.

Free tickets will be given out beginning at Monday at 10 a.m. for the April 7 show, according to Leno's Web site.

All About Jay Leno • The Tonight Show with Jay Leno