(CNN) -- Americans are watching more video online, on their cell phones and on television, according to the Nielsen Company's latest "three screen" report. 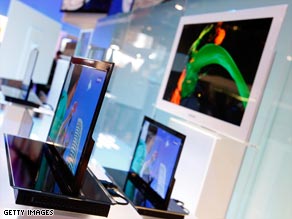 Viewers are watching more television on more kinds of screens than ever.

The report, issued Monday and covering the last three months of 2008, shows that the average American television viewer is watching more than 151 hours of television per month -- an "all-time" high -- up from more than 145 hours during the same period the previous year, Nielsen said.

The increase in television watching is part of a long-term trend, said Nielsen spokesman Gary Holmes.

He attributed the rise to a greater availability of televisions -- the average household has more televisions than people, he said -- and to niche programming. There are "many, many more cable channels than before," he said. Read the full report (PDF)

Also contributing to the increase are digital recorders, DVR and TiVo devices, which allow viewers to watch programs at their leisure rather than during the show's slated time slots. Nielsen has dubbed such viewing "timeshifted TV."

"DVR has helped keep television alive and well," said Robert Thompson, the founding director of the Bleier Center for Television and Popular Culture at Syracuse University.

"That's made a lot of people watch more television than they used to," he said.

The presidential election likely helped augment viewership, Thompson said. The "new series of this year was 'The Barack Obama Show,' " he quipped.

The tanking economy may also have played a role in the uptick in television watching, as Americans looked for low-cost ways to entertain themselves, some analysts said.

Americans are staying at home instead of going out, and they're also taking fewer vacations, said David Schick, an analyst with Stifel Nicolaus, an investment banking firm.

And while Thompson and James Webster, a communication professor at Northwestern University, say the state of the economy certainly isn't going to hurt television viewership, both experts emphasized that the increased viewership trend is several years old.

They also cautioned against reading too much into the Nielsen statistics.

Though Nielsen reports Americans are watching five hours of television a day, Webster noted that Nielsen has no means of determining if they are paying close attention to the programs or if they just have them on in the background.

People may have the television on while they are doing other things, Thompson added.