Clooney returns from Darfur, on a quest for peace

(CNN) -- On Monday night, CNN's Larry King had an exclusive interview with actor George Clooney, who returned from the strife-torn Darfur region of Sudan and just finished meeting with Vice President Joe Biden. 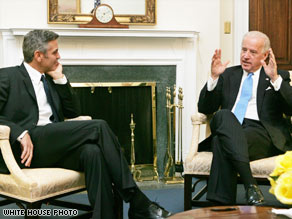 King spoke with the activist actor live from the White House on the humanitarian crisis Clooney says we must confront, along with getting a couple of tidbits about what's next for Clooney's acting career.

The following is a partial transcript, edited for brevity and clarity:

Larry King: We begin with George Clooney, the Oscar-winning actor and activist. He's traveled to Darfur at the refugee camps near the Sudan/Chad border last week and met with Vice President [Joe] Biden today.

He's standing, as you see, in front of the White House, where it's 12 degrees. And we thank him for doing this, because he's freezing to death.

George Clooney: I should have worn an overcoat tonight.

King: You have no coat on?

King: Well, you've always been a little strange, George. Anyway, you met with the vice president today about Darfur. What did you tell him?

Clooney: Basically, we were just talking about coming back from Chad, right on the border of Darfur. And we were talking about there's a moment coming up relatively soon, probably by the middle of next week, where the International Criminal Court is going to indict the president of Sudan for war crimes, which has never happened before -- a sitting president.

And we talked about this being an opportunity, perhaps, not just for the United States, but all of us together to work with the international community in a real diplomatic effort to try and bring some sort of peace to this region.

King: What scale of interest did Biden show?

Clooney: Vice President Biden has been incredibly vocal on the issue. We had a long talk about the idea of, first and foremost, appointing a high level, full-time envoy that reports directly to the White House so that it's not just temporary. We need somebody working on this, you know, every day -- getting up every morning with their sole job to find peace in the area.

King: What did you see last week?

Clooney: It was rough. You know, it's always rough over there. You feel terrible for them. They're hanging on by a thread.

We saw an awful lot of fear. There was [also] a tremendous amount of hope. You know, there was a lot of hope that these indictments and this new administration are going to be able to help move the international community toward toward a real peace.

Clooney: I could tell you a million stories about how it actually affects you personally. But I don't think people should be going there and coming back and saying how it affected them. I think somehow we should all know that these people are hanging on by the skin of their teeth.

King: Was your safety in jeopardy?

Clooney: Oh, you're talking about the U.N. story.

King: Yes. What, they pulled your security, right?

Clooney: I was never in jeopardy. I was with journalists who wanted to go into some areas that weren't particularly safe. And we decided that we would go. And that wasn't necessarily part of what the U.N. was looking to do.

And so we just went on our own. It was fine.

I wanted to say something, also, Larry, which I forgot to say about what I just did today. I delivered 250,000 postcards signed by people all across the country who wanted to help give some political capital to and remind this administration of how important this issue is. It was from the Save Darfur people. But it's from all across the country. And we're probably going to have another 700,000 by the end of the week.

King: What specifically, George, do you want Secretary of State Clinton and the administration to do?

King: One other quick thing. Are you going to be in the final presentation of "E.R. ?"

Clooney: Actually, I'm doing a remake of "Friends," which -- I didn't want to break the news.

King: I'm thrilled for you, George.

Clooney: Thank you. It's a career move. It's a choice.

Clooney: I am. I'm in the last episode with Susan Sarandon and Julianna Margulies. So it should be fun.

King: Thanks, George. Get out of the cold.

Clooney: Thank you. It's good to talk to you.