(CNN) -- Barack Obama is smarter than the average president, but he still has a lot to learn, according to comedian Bill Maher. 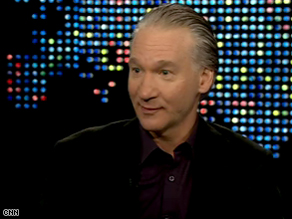 The president's nominees for Cabinet posts should be astute enough to pay their taxes, Maher said Thursday on CNN's "Larry King Live."

And Obama shouldn't expect much help from Republicans in resolving the country's economic crisis, he said. Not as long as they're listening to Rush Limbaugh anyway. The following is an edited transcript of political observations from the host of HBO's "Real Time With Bill Maher."

Larry King: A big story today, Bill. I wonder your reaction to it. Judd Gregg, the senator from New Hampshire, says I will take the job [commerce secretary]. They do a beautiful little press conference. And the president announces how close they've been through the years without agreeing. And now he quits today. ...

Bill Maher: I was crushed because, you know, having found out who Judd Gregg was two days ago, the idea that now I'm not going to have him to talk about was just devastating to me. Judd Gregg. Wow! ...

King: Well, why do you -- why would you think he took it and then didn't take it?

Maher: Well, because it's a big Washington job. I think it probably was a pay increase and a status increase and I'm in the Cabinet. And then I guess his Republican friends got to him -- you know, like the mob.

But, you know, I think Obama is learning, and he certainly is the smartest guy we've had there that I can remember. But there's always a learning curve.

And I think what he's learning, first of all, is that there's no such thing as a moderate Republican anymore, is there?

Maher: ... her colleague [Susan Collins] and Arlen Specter. That's three out of a Congress of 535. That's pretty amazing, isn't it?

So I think what Obama has to do is adjust to that. And this is part of that learning process. And I think he probably shouldn't have offered so much, for example, in the stimulus package right away. He offered what they wanted -- the tax cuts, which really are not stimulus. And he should have said from the beginning, look, I won the election, OK? We're going do it my way now. We tried that idea -- that tax cuts solve every problem. We had that. And that's what got us into this mess.

Because now he's in a situation where he offered the tax cuts before any negotiating took place, and they threw him the back of his hand. So now that when they got the compromise on whatever it was, there's still like 35 percent tax cuts in there.

Watch Maher sound off on how Obama's doing »

King: So, overall, how is he doing? In this short period of time, with some goofs he's made?

There's one he even called.

Maher: Yes. He's -- well, I mean, considering the alternative, he's doing fantastic. And he's a pleasure to watch. I just watched him there talking about Lincoln. I mean he can put a sentence together. He's eloquent and he's -- he's unflappable. I mean, he's so cool and calm.

Is he on Xanax?

I mean ... sometimes I wonder about this guy. I wish my broker was that calm.

King: Do you think he's going to solve this economic problem?

Maher: Well, he can't personally solve anything. I mean, he needs a partner in the American people. That's -- that's the big question, I think, that's before America is, you know -- does he have a partner?

Can we call it upon ourselves to do what we need to do to dig ourselves out of this mess, because there really isn't a shovel big enough?

I mean this is a mess like -- and I don't think they're telling us really how -- how bad it is. I think that's why [Treasury Secretary Timothy] Geithner was so vague the other day when he presented his plan, because I think he just didn't want to say it's even worse, because I think there would be more of a panic than there is.

Maher: I think there's every possibility that that's possible. And certainly most economists don't think that this stimulus plan, as it's passed, is nearly big enough. I thought it was interesting he was -- he mentioned Darwin, you know, and ...

King: All in the same day as Lincoln.

Maher: I read the other day, I think only four in 10 Americans believe in evolution. It's still not a very bright country, Larry. And I think it was interesting because he -- Obama has made the point recently that although politicians are disagreeing about the stimulus package and whether we should spend money -- government money now, really, economists don't. And it reminded me the way politicians for years, when they talked about evolution, said well, people disagree.

King: Donald Trump, the other night here, said we're in a depression. They're not calling it that, but that's what it is. Do you agree?

Maher: I don't know. He would know better, because I'm always depressed when I watch him. [Laughter] ...

King: What happened to Tom Daschle?

Maher: Oh, I heard he didn't get that job [health secretary].

King: I know, but the tax thing.

... I mean this is the biggest stumble he's made so far, was I'm starting off with a clean, new administration, new ethics. And then nobody pays taxes.

You know, it's a shame. But again, I think he's learning. First of all, I think the good lesson there is that no one person is indispensable. You know, somehow this guy Geithner was the one we had to have as treasury secretary. And he looked not like he was ready for prime time yesterday.

Tom Daschle was the only one who could do health care. It's nonsense. You know, not any one person. Everybody has a different style. But somebody will get health care done if they can get, I guess, Republicans to come on board.

And I think what Obama is doing now, going around the country, that's what he needs to do -- put pressure on this Republican Party, where there are no moderates. They don't -- they just don't get it, that we have moved on from their old way of ...

King: He doesn't need their votes, does he?

Maher: Well, he needed the three in the Senate, didn't he?

King: Yes, he needed them.

Maher: You know, I hope that they're looking at what he's doing, because he's going to Republican areas. He went to Indiana -- a Republican district. He went to Florida. When he read that onstage: "The stimulus package passed," they all cheered.

You know, the people, I think, are on his page. And, you know, I think we need one more election to get rid of some of these mossbacks who just don't get it. I mean they're taking their orders -- their marching orders from Rush Limbaugh. He is effectively the head of the Republican Party right now.

King: Did you call him a traitor?

What -- how do these things get going?

He's the one who said I'm rooting for Obama to fail.

Yes, I would say that that's probably what Osama bin Laden is rooting for -- Obama to fail.

Maher: So I'm just saying Rush and [Osama] are on the same page.

Maher: Who else are they following?

I think they're absolutely following Rush. And that's how clueless that party is. They looked to find the future, and they found radio.