Where 'Lost' intends to go

(Entertainment Weekly) -- Across the street from a neatly tended cemetery on the island of Oahu, there is a gated lot where the past, present, and future of "Lost" all come together. The Others' submarine, Henry Gale's hot-air balloon, Locke's outrigger -- all beached on the grass like so many Black Rock shipwrecks. 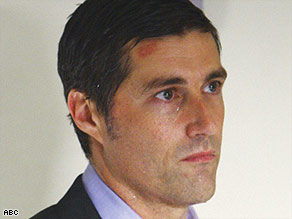 "Lost" star Matthew Fox is confident the series will go out at the top of its form.

And inside a large soundstage, hidden away from prying eyes, "Lost's" iconic castaways are huddled on a top-secret set, trying very hard not to totally spaz out. The action being shot for the year's 12th episode is almost spoilerifically indescribable, but we can report -- perhaps to your great relief -- that most of the gang is back on the Island after an early sweep of time-travel episodes that kept many of them separated by distance and history.

Jack (Matthew Fox) sits tense and terse, dressed as ... uh ... can't say. Sawyer (Josh Holloway) bursts through a door, freaking out over...someone. Someone who is bleeding. A lot. As Kate (Evangeline Lilly) eyeballs both her men, trying as always to decide between them, psychic hustler Miles Straume (Ken Leung) cradles a shotgun while fretting about -- and we think we're getting this right -- the catastrophic collapse of the space-time continuum! (Or maybe he said "the economy." Same difference, though, right?)

No, "Lost" definitely isn't playing it safe, even though it has every reason to do just that. It didn't even try. Instead, "Lost" has opted to start season 5 by baring its potentially alienating geek soul and challenging its audience even more with gonzo storytelling.

Thought the show was confusing before? Try this on for size: Time travel. Quantum physics. Hydrogen bombs. And a "Da Vinci Code"-meets-"Foucault's Pendulum"-meets-"Weekend at Bernie's" conspiracy to save (or destroy) the world, the linchpin of which involves U-Hauling the corpse of John Locke (Terry O'Quinn) back to the Island. Keep it all straight at Entertainment Weekly's "Lost" hub

When the gloriously strange saga of "Lost" finally concludes next year, season 5 is likely to be remembered as the one when the series came out of the closet and declared itself. But here's hoping it doesn't lose everyone in the process: So far this season, "Lost" is averaging 11.3 million viewers, down 3.4 percent from last season, and a far cry from the series-high average of 15.9 million in season 1.

But the producers say: Come what may.

But is it too weird? "I was a little worried about the start of the season, to be honest," says Lilly, battling back a cold and enjoying some late-afternoon Hawaii sun in between takes. "It might sound terrible to say, but the mythology of this show eludes me. I am all about the characters and the interplay of the relationships and the angst of redemption and retribution -- all those good nuggets."

Her costar Matthew Fox has another, more optimistic take. "It feels very different from what 'Lost' has felt like in the past, but in a really good way," says the actor. "There will be many, many answers, lots of things from past seasons that left the audience thinking, 'That's never going to pay off' -- but it does, in really cool ways that make you go 'Holy s---!' "

Of course, "Lost" has always been pretty off its rocker. Ghosts. Locke's legs. Smokey the monster. Those who've hoped "Lost" would avoid sci-fi answers may have been fooling themselves. "Honestly," says Lindelof, "the non-genre answer just isn't that interesting."

And now it's clear the time-travel element of the Island (beyond just the flashbacks/flash-forwards) has been part of the show from the beginning.

"This season, it's like the audience is finally opening up a present that was actually bought and wrapped years ago," says Lindelof. "At least, we hope they think it's a present."

In other words: The producers have a master plan -- and an exit strategy. But that master plan couldn't be unleashed fully until Lindelof and partner Carlton Cuse negotiated a series end date during season 3. "The same way our characters were sort of locked in cages in season 3, when the show went awry," says Cuse, "we felt locked in cages because we didn't know if our mythology had to go two more years or nine."

Now uncaged, the producers face the challenge of telling their story successfully without unraveling the franchise. The producers promise an approach to time travel backed by researchable science (Popular Mechanics even has a "Lost" blog analyzing it) and grounded in humanity..

Some cast members have worried that a sci-fi emphasis might compromise the show's identity, limit its possibilities, and make the drama even less accessible to non-geek-minded viewers.

"I'm mixed about it, to be honest," says Daniel Dae Kim, whose presumed-dead Jin was discovered alive and well on a recent episode. "One of the things that attracted me initially to this show was how universal the themes were and how different the kinds of stories it could tell. Now, I feel with the sci-fi we're becoming definable in a way that maybe we weren't in the first season. At the same time, I like how the writers are showing allegiance to the true fans. The people who stayed with us are being rewarded with the more complicated and nuanced storytelling that they've been hungering for."

As for ABC's feelings about "Lost's" dive down the sci-fi rabbit hole, senior VP of current drama programming Kim Rozenfeld says, "There were aspects that were certainly unorthodox, but we were comfortable because we knew how they set up the larger story."

Lindelof and Cuse are hopeful fans remain enthusiastic. "We feel like the audience will be really clamoring to get back to the Island after these first seven episodes," says Lindelof. "And they'll get a big massive dose of it for pretty much the remainder of the season."

For all the excitement as the series winds down, "Lost" -- brainy, challenging, locked into an evolving, serialized story -- remains a tough choo-choo to jump aboard if you're not already up to speed. Ratings are likely to continue to inch down as opposed to up.

But the producers aren't sweating it.

"For most showrunners, existence is predicated on 'If I get good ratings, I get to keep doing this,' " says Cuse. "But we know 'Lost' is ending, no matter what the ratings are. So we're just trying to make sure that we end the story well and we get it executed on film the way we want it."

For the complete EW cover story on "Lost," as well as more information on the show, click here.