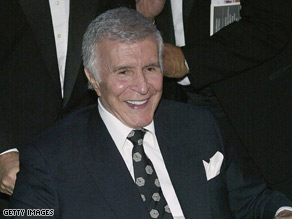 Ricardo Montalban attends the opening of a theater named for him in 2004 in Hollywood, California.

Montalban, 88, was in deteriorating health over the past several days but "died peacefully" at 6:30 a.m. at his home, son-in-law Gilbert Smith said.

He understood "it was his time," Smith said. The cause of death was not given.

Montalban rose to prominence as one of the most visible Hispanic actors in post-war Hollywood in the 1950s and 1960s. But his star grew as he took on television roles as the mysterious host Mr. Roarke on the hit drama "Fantasy Island" and as Captain Kirk's archnemesis Khan Noonien Singh in "Star Trek II: The Wrath of Khan."

Born in Mexico City, Mexico, on November 25, 1920, Montalban knew at an early age that he wanted to be an actor. He moved to Hollywood as a teenager, and his first big break came when he was cast in a small part in a 1941 play, Tallulah Bankhead's "Her Cardboard Lover."

After starring in 13 Spanish-language films in Mexico, Montalban made his American feature film debut in 1947 in "Fiesta."

Montalban became a member of the MGM stable and was often cast in the role of the steamy Latin lover opposite such female stars as Lana Turner and Esther Williams.

While working on "Across the Wide Missouri" with MGM's biggest star, Clark Gable, Montalban suffered an injury to his spinal cord that, despite surgery, would plague him for decades to come, according to Turner Classic Movies.

It was during this early stage in his career that Montalban dedicated himself to changing Hollywood's stereotypes of Latinos.

"When I first came to Metro-Goldwyn-Mayer under contract in 1945, that's when the image was at its worst," Montalban said. "They didn't realize that by trying to be colorful, they were very insulting."

Montalban played a wide range of film roles over the years, often relishing the chance to play in comedies.

As he approached midlife in the 1960s, Montalban made numerous guest appearances on television shows including "The Untouchables" and "The Lieutenant," eventually landing a recurring role as Damon West on the popular medical drama "Dr. Kildare."

During this period, Montalban secured his place in science-fiction history playing the evil but charismatic Khan in the first season of "Star Trek."

Montalban's dignified demeanor and rich accent added flair to the small screen on a number of television shows. It also established him as a popular pitchman for Maxwell House Coffee and Chrysler.

It was the role of the wise and benevolent Mr. Roarke on the 1970's hit TV series "Fantasy Island" that perhaps earned Montalban his greatest number of fans, something he called "very rewarding." iReport.com: Share your memories of Montalban

But he said he tired of hearing fans shouting "Zee plane, zee plane" when they saw him. The line was featured in the show's opening credits by another character, Tattoo.

"They think they are the only ones that thought of saying that," he told CNN during the 1990s. "People mean well, but the joke gets a little tired at times."

Montalban never tired of fighting for the rights of Latinos in Hollywood. For almost 20 years, he served as president of Nosotros, an organization he founded for the advancement of Hispanics in the entertainment industry.

"The ideals of Nosotros continue. As our community of Latinos in show business increases, so will our participation in all of the many aspects of our industry," he said in 1987.