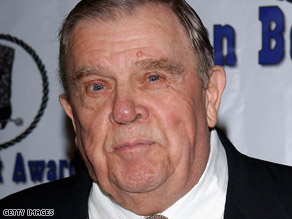 Pat Hingle was a familiar face to moviegoers and TV watchers for his many roles.

"He was awake one moment, and in the next breath, he was gone," Heritage said.

Hingle began his acting career in the 1950s, appearing in numerous television theater shows. His first movie role was an uncredited appearance in 1954's "On the Waterfront," which won eight Academy Awards; he played the by-the-book judge opposite Clint Eastwood's vengeful marshal in 1968's "Hang 'Em High," and appeared as Sally Field's father in 1979's "Norma Rae."

In 1989, he appeared as Gotham City's Commissioner Gordon in Tim Burton's "Batman," carrying on the role through three sequels. His last film role was in "Talladega Nights: The Ballad of Ricky Bobby," released in 2006.

He also guest-starred in countless TV series, including a memorable turn as a character named Col. Daniel Webster Tucker in a 1980 "M*A*S*H" episode. In the episode, called "April Fools," Hingle's Tucker antagonized the unit's surgeons -- with surprising consequences.

Hingle is survived by his wife of nearly 30 years, Julia, and their five children.