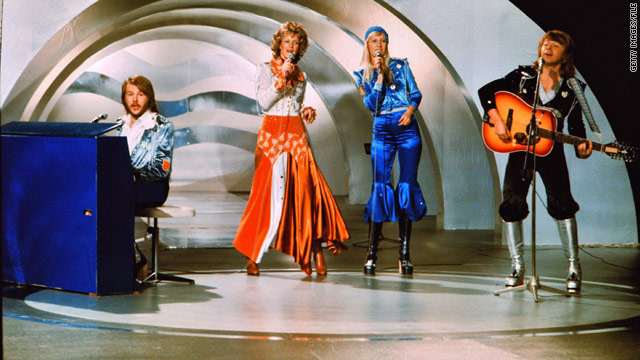 The group ABBA has made the cut to be inducted into the Rock and Roll Hall of Fame.
STORY HIGHLIGHTS
RELATED TOPICS

(CNN) -- Pop supergroup ABBA will join icons of the '60s and '70s -- Genesis, Jimmy Cliff, the Hollies and the Stooges -- as they are inducted into the Rock and Roll Hall of Fame next year, the Hall announced Tuesday.

Both ABBA and the Stooges have been nominated in years past but have not made the cut.

The induction ceremony will take place March 15 at the Waldorf Astoria Hotel in New York .

The 2010 inductees were chosen by a voting committee of the Rock and Roll Hall of Fame Foundation. Artists are eligible for inclusion 25 years after their first recording is released.

The inductees "represent a great cross-section of artists that define the broad spectrum and history of rock 'n' roll and people that have contributed immeasurably to our business," Foundation President and CEO Joel Peresman said.

ABBA, a Swedish group that became one of the most successful acts in pop history, released their first album, "Ring, Ring," in 1973. The group gained a new fan base last year with the movie version of the musical "Mamma Mia," which incorporates songs such as "Dancing Queen," "Mamma Mia," "Money, Money, Money" and "The Winner Takes it All."

Peter Gabriel was the original lead singer of the progressive rock band Genesis in the 1960s, but the group rose to greater popularity when he left in 1975 and was replaced by Phil Collins. Some of the band's more familiar songs include "Follow You, Follow Me," "Tonight, Tonight, Tonight," "Invisible Touch" and "We Can't Dance."

Cliff is a Jamaican ska and reggae singer who is credited with introducing reggae to a broader audience through his starring role in the 1972 film "The Harder They Come" and the release of the accompanying soundtrack.

Founded and led by the Iggy Pop, the Stooges were a forerunner of the punk and hard rock movements in the late 1960s.

Part of the British Invasion, the Hollies had a string of pop hits in the 1960s and were characterized by their three-part harmonies and squeaky clean image.

Two of the original members continue to tour today. The group released their most recent album, "Then, Now, Always," in March.