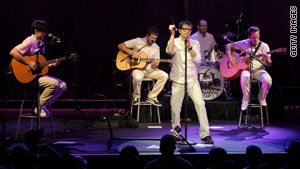 Glen, New York (CNN) -- The lead singer of the rock band Weezer was involved in a bus accident Sunday that left him and another passenger in an upstate New York hospital.

Rivers Cuomo, 40, complained of rib pain and was transferred, along with one other passenger, to St. Mary's Hospital in Amsterdam, New York.

Cuomo's wife, daughter, and a fifth passenger on the bus were uninjured. The bus was traveling from Toronto, Ontario, to Boston, Massachusetts, for a show Monday night at the Agganis Arena at Boston University.

The driver said the back end of the bus slid on ice, then went into the median and hit some reflective posts before crossing back over the highway, going over the guardrail and landing in a ditch.

It had snowed about two inches overnight, police said. The roads were generally wet Sunday morning, but not covered in snow, Dollard said.

Police said they do not suspect drugs or alcohol were a factor in the accident.

The vehicle is a 2009 Prevost tour bus registered to Night Train Coach Inc., out of Tennessee.