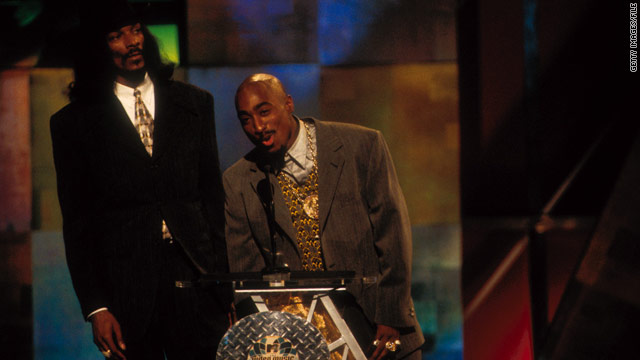 A song by Tupac Shakur, shown in 1996 at the MTV Video Music Awards, was selected by the Vatican for its playlist.
STORY HIGHLIGHTS
RELATED TOPICS

(CNN) -- Music from late rapper Tupac Shakur has been included as part of the Vatican's official MySpace Music playlist.

The seat of the Catholic Church released a list of 12 songs onto the social networking Web site's streaming music service this week when the site launched in the United Kingdom.

Among selections from Mozart, Muse and Dame Shirley Bassey is the slain rapper's song "Changes," which was released two years after his shooting death on a greatest hits album in 1998.

"The genres are very different from each other, but all these artists share the aim to reach the heart of good minded people," the Vatican wrote on its official MySpace Music page.

As of Thursday night, "Changes" had been played more than 4.6 million times on the Web site.

The list was compiled by Father Giulio Neroni, artistic director of church publisher St Paul's Multimedia. He was also responsible for compiling the Vatican's recent Alma Mater album, which combined Gregorian chants and prayers with classical music and the voice of Pope Benedict XVI speaking in five languages.

Shakur, who spent time in prison for sexual assault, was gunned down in a drive-by shooting in Nevada in 1996.

The lyrics of "Changes" describe Shakur's desire to change a grim life of drugs, crime and violence on the streets.

Lyrics of the song, which is labeled as "explicit," include 'Is life worth living, should I blast myself?" "Give the crack to the kids, who the hell cares, one less hungry mouth on the welfare," and "My stomach hurts, so I'm looking for a purse to snatch."

At another point, Tupac sings: "Cause both black and white are smokin' crack tonight."

In contrast, the playlist also contains selections from the album "Music of the Vatican" such as "Advocata Nostra" and "Causa Nostrae Laetitiae."

Other contemporary tracks on the mix include Muse's "Uprising" from their new album "The Resistance" and "He Doesn't Know Why" by the folk group Fleet Foxes.