Strokes frontman: 'I was hung over for two years' 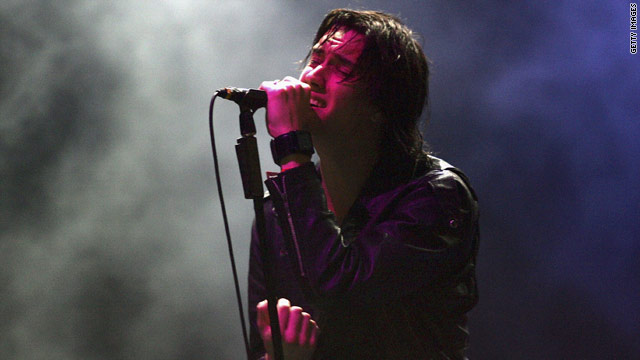 Julian Casablancas is playing solo gigs in conjunction with his new album, "Phrazes for the Young."
STORY HIGHLIGHTS
RELATED TOPICS

Los Angeles, California (CNN) -- Julian Casablancas emerges on stage at the Downtown Palace the way you remember him: black leather, perfectly unkempt hair and that unmistakable Iggy Pop boom of a voice.

But something is missing: the Strokes.

Casablancas, the chief songwriter and singer of the group that helped usher in the new millennium with a garage-rock revivalist swagger, is performing with a backup band, no Stroke among them.

Early in the show he sings a song, "Out of the Blue," from his new album: his first solo effort, "Phrazes for the Young."

"Yes I know I'm going to hell in a leather jacket," the song goes. Later, on "River of Brake Lights," he sings about "finding it hard to get very far."

But after an intermission, his backup band springs onto the stage in white suits under blinding bright lighting effects. And Casablancas sings, "It won't end here/Your faith has got to be greater than your fear" (from "11th Dimension") and "You won't have any trouble now" (from "Glass").

After the Strokes' success this decade, Casablancas battled alcoholism as he struggled to get a grip on success.

"I overdid everything. I was hung over for two years. If I didn't drink, I didn't do anything. It was bad," he says.

But now, the soon-to-be father has returned to his notoriously workaholic ways and has crafted a record he is proud of.

"You don't know where it's from, but you like it," he says of its sound. "That's the aesthetic of the record. Is it in the future? Is it old? Ahead of its time? What is it? Hopefully, it's timeless."

The Strokes, who will return to the stage at the 2010 Isle of Wight festival, have staked a claim to timelessness: The group's first album, 2001's "Is This It," was named album of the decade by the British music publication NME.

Casablancas talked about the Strokes' sound, his fondness for the early '80s and working through the creative process. The following is an edited version of the interview.

CNN: You have said you had "no choice" but to do this album. Why?

Julian Casablancas: I feel like I would've been a fool if I didn't. I love the band, and I will always want to do that. But it's nice to do things my way, too.

The main reason is that you are playing with people, but maybe they are not very interested in what you're offering. [Everyone] going off and doing their solo records is great, and I respect them. But it's nice to do your work and be appreciated for what you do.

CNN: Were there any new sounds or techniques you set out to explore, knowing this would be a solo album?

Casablancas: Yes and no. Yes, because I knew I couldn't do it with the Strokes. But no because I guess I wish I could have done it with the band originally.

CNN: So you were going to take these songs to the band and that would be the next Strokes record?

Casablancas: It's not that simple. I had ideas and tried to communicate them, and people weren't that interested in talking about them.

CNN: Any reason why?

Casablancas: Who knows? I'm not a psychiatrist. ... I can't get into that, unfortunately.

CNN: Reviews of the album talk about how different it is from the Strokes, but you don't see it that way. It does sound like this music would be ideal for the band.

Casablancas: The Strokes can play anything. They could play "Thriller," and it would just sound like "Thriller" as played by the Strokes. When I was describing the sound [of this album], I was saying "yeah, I'd like it to sound like a Queen record or 'Thriller.' " Late '70s/early '80s, to me, was the peak of sound technology. You know, when it was still cool sounding. Before it took that late '80s/'90s turn.

CNN: I can certainly hear that in this record, that era. A lot of synth.

Casablancas: There's a lot of that stuff. With the '80s stuff, when they tried to be super-futuristic, it sounds charming now (laughs). It still kind of sounds futuristic, but it sounds dated, too. Some of that really works for me.

CNN: What was the focal point, lyrically?

Casablancas: Sometimes in the past, I used to not write anything down. I would go from memory. Lyrics were secondary. It was all based on what sounded better.

Now, though, I record everything I do and the creative moments I have. I don't analyze them. It's more about editing and putting songs and words together and making songs flow. It's like a cataloging duty. So it's all over the place. ...

It's all these different things I go through. I went through different waves. So the answer is (long pause) ... I don't know. (laughs)

CNN: Was this album a part of the process in getting you through a tough battle with alcohol?

Casablancas: Hmm, not really. "Ludlow Street," when I started writing that, the first few lines, it was about being hung over. But as [the song] goes forward, it goes to [other places]. I'm not a pop song lyric writer. I can't just focus on one simple meaning or even a double entendre. ...

It's not all about getting sober. The problem is, I did all the drinking for my whole life in a two-year span. I wish I had spaced it out. Drinking is great. It makes you happy. But the next day, it makes everything feel as twice as bad as it was before. So what's the point? It's delicious but poisonous.

CNN: What was your reaction when NME called "Is This It" the album of the decade?

Casablancas: Unbelievable. I hadn't thought about it, but it's really weird. I like it, though.

CNN: What stood out for you in this life-changing decade?

Casablancas: Probably that: having people or magazines say that your album is the best of the decade. That's not something I ever thought in my wildest dreams.