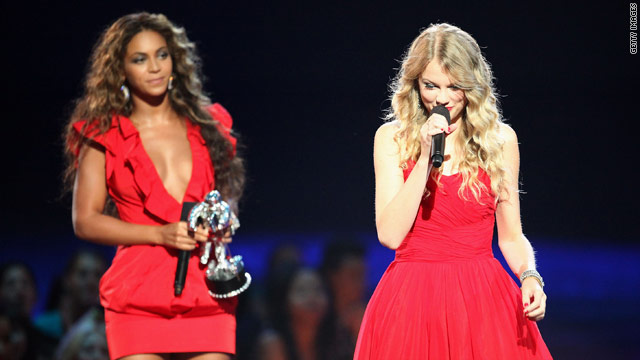 Los Angeles, California (CNN) -- The Grammy stage is set for a redux of one of the most infamous moments in music award show history when Kanye West interrupted Taylor Swift's acceptance speech after a win over Beyonce at September's MTV awards show.

Just seven of the 109 Grammy categories were announced during the CBS telecast, while the rest of the nominations filled 66 pages handed out to reporters.

Beyonce gathered 10 nominations, while Swift, a country-pop crossover sensation, was nominated in eight categories. West got six Grammy nominations, but all were for his collaborations with other artists. His solo performances were snubbed, suggesting there may have been fallout for his antics.

It was when Swift beat out Beyonce for best female video at September's MTV awards that West jumped on stage to declare Beyonce's work superior.

Video: 'Use Somebody' gets Grammy love

West may have three chances to repeat his stunt, since Beyonce and Swift go head-to-head for record, song and album of the year. Lady Gaga was also nominated in those three categories.

Jennifer Nettles, half of the country duo Sugarland, said Swift's success is exciting because she "has brought a lot of young people into country music."

The best musical comeback story may be R&B singer Maxwell who has been out of the spotlight for eight years. Maxwell's album "Blacksummers' Night" and hit single "Pretty Wings" brought him six Grammy nominations.

Maxwell performed a musical tribute to Michael Jackson during the nominations show, singing "Lady in My Life," a ballad from Jackson's "Thriller" album.

"I've been gone for eight years," Maxwell said later. "I've been throwing out my trash, buying my milk and living in basic obscurity."

Canadian rapper Drake got two Grammy nominations -- for best rap song and best rap solo performance -- despite the fact he's never released an album. His hit "Best I Ever Had" was only released on a mix tape. He's still working on his album, which he hopes will be ready in March, he said.

Drake, 23, said when he was a high school student he had trouble falling asleep at night because he would "sit there and dream of hearing my name called at a Grammy nominations' press conference."

"It's very surreal," he told reporters.

The Black Eyed Peas earned six nominations, including a record of the year nomination for their hit "I Gotta Feeling." They performed the song live during the Grammy broadcast.

"With the recession and this environment, it really felt like people needed a pick-me-up and kind of an escape to feel good," Black Eyed Peas member Fergie said about the song.

The group's singles have dominated the top of the charts for last several months, a feat Black Eyed Peas front man Will.i.am said was the result of their use of the Internet to reach fans.

"You can't just pretend it's 1998 and put your song out and do a video and expect people to play it," he said. "You have to go out in the world and make it stick. You have to collaborate with your fans."

Alternative rock band Kings of Leon earned four nominations this year thanks to last year's "Only By The Night" album. The single "Use Somebody" is up for both song of the year and record of the year. The same album that gave them three nominations last year, one of which they won.

"It's good to have a record people can tolerate for that long," drummer Nathan Followill said.

Speaking of music lasting, the pop duo of John Hall and Daryl Oates were among this year's nominees for best pop performance by a group or duo with vocals. It is for a live performance of "Sara Smile" -- their first hit in 1976.

The five nominees for best new artist include the Zac Brown Band, Keri Hilson, MGMT, Silversun Pickups and The Ting Tings. Lady Gaga, considered by many to be this year's biggest breakout act, was ruled ineligible because she had a song released and nominated last year.

The Grammy competition is much more than pop, rock, rap and country. There are 29 fields honored, but it no longer includes polka. The best polka album category was eliminated this year, upsetting polka legend Jimmy Sturr who won the Grammy 18 of the 24 times it was given out.

Producers, musicians, engineers and other members of the Recording Academy get their Grammy ballots in two weeks.

The 52nd Grammy Awards show is set for the Staples Center in Los Angeles on January 31, 2010.