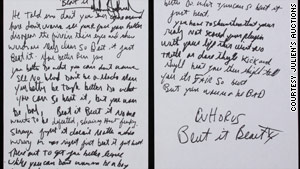 Profits from the auction at the Hard Rock Cafe in New York's Times Square crushed pre-sale expectations of only $120,000 in sales.

The highly prized memorabilia, which included items spanning the many stages of Jackson's career, came from more than 30 fans, associates and family members, who contacted Julien's Auctions to sell their gifts and mementos of the singer.

Jackson's flashy glove was the big-ticket item of the night, fetching $420,000 from a buyer in Hong Kong, China. Jackson wore the glove at a 1983 performance during "Motown 25," an NBC special where he debuted his revolutionary moonwalk.

Fellow Motown star Walter "Clyde" Orange of the Commodores, who also performed in the special 26 years ago, said he asked for Jackson's autograph at the time, but Jackson gave him the glove instead.

"The legacy that [Jackson] left behind is bigger than life for me," Orange said. "I hope that through that glove people can see what he was trying to say in his music and what he said in his music."

Orange said he plans to give a portion of the proceeds to charity.

Hoffman Ma, who bought the glove on behalf of Ponte 16 Resort in Macau, paid a 25 percent buyer's premium, which was tacked onto all final sales over $50,000. Winners of items less than $50,000 paid a 20 percent premium.

Darren Julien, president and CEO of Julien's Auctions, said people were hungry for such tokens of Jackson's life, as evidenced by the 3,500 who registered as bidders for the auction.

Tori Renza, whose father bought her the Bad jacket when she was just 4 years old, said she grew up singing and dancing to Jackson's songs around her house.

"It just became part of our family," said Renza, who planned to use the money from the auction to pay back student loans.

Jackson's famed fedora, which he sported at the 1995 MTV Music Awards, sold for $73,800. It was one of three hats Jackson wore during a 10-minute medley before hurling it into the crowd.

The hat was auctioned at a charity event that year, and the letter of verification is signed "Lisa Marie Presley Jackson," the daughter of Elvis Presley who was married to Jackson for nearly two years.

Handwritten lyrics of the 1983 smash hit "Beat It," which Jackson scribbled on a piece of white paper, went for $60,000.

One of the more bizarre items up for bidding, an upper mold used to fit Jackson with animal fangs for the 1983 video for "Thriller," sold for more than $10,000.

The auction also allowed the world to see photographs of Jackson engaged in simple activities, like driving.

There were also a number of autographed photos, as well as signed books, collectibles and artwork. Even Jackson's doodles and sketches of the likes of Frankenstein, Mickey Mouse and Charlie Chaplin were up for sale.

Lee Tompkins, a renowned pencil artist who said he came to know Jackson in the early 1980s and owns approximately 75 of Jackson's artworks, auctioned two of Jackson's pieces: one of a vagabond and the other of Charlie Chaplin. They sold for $20,000 and $33,280 respectively.

"He's more than just a singer and dancer. He was an artist first," Thompkins said.

Before Saturday's auction, the items were exhibited in Santiago, Chile; Dublin, Ireland; and Tokyo, Japan, where crowds lined up for hours get a glimpse of them, Julien said.

"Michael Jackson is looking down and has to be happy," he said after the auction, adding, "We lost an icon."