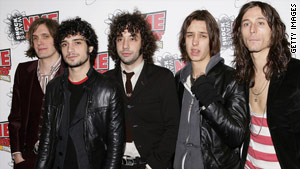 The Strokes revealed plans to release a fourth studio album in a message on myspace in March, 2009.
STORY HIGHLIGHTS
RELATED TOPICS

London, England (CNN) -- The debut album by New York rock band The Strokes has been named "album of the decade" by influential British music magazine, NME.

Released in 2001, "Is This It" topped the 100 Greatest Albums Of The Decade list compiled by a panel of musicians, producers, writers and record label bosses, according to NME.com.

The Libertines' 2002 debut "Up the Bracket" was runner-up, with Primal Scream's "XTRMNTR" from 2000 in third spot.

Fans had to wait two years before "Is This It" was finally released to critical acclaim, with hits such as "Last Night" and "Hard to Explain" underlining their Velvet Underground-inspired garage rock sound.

However, the album fared better among British fans, reaching number two in the charts compared to 33 in the United States.

The band's second album, "Room On Fire", was released in 2003 and again reached number two in the British charts with singles including "12:51" and "Reptilia."

Top 10
1. The Strokes - Is This It
2. The Libertines - Up The Bracket
3. Primal Scream - XTRMNTR 4. Arctic Monkeys - Whatever People Say I Am, That's What I'm Not
5. Yeah Yeah Yeahs - Fever To Tell
6. PJ Harvey - Stories From The City, Stories From The Sea
7. Arcade Fire - Funeral
8. Interpol - Turn On The Bright Lights
9. The Streets - Original Pirate Material
10. Radiohead - In Rainbows

But their third album, "First Impressions of Earth", gave the band its first number one success, when it snatched top spot in Britain in 2006.

It also reached the hitherto unknown heights of number four across the Atlantic.

On hearing about the NME accolade, frontman Casablancas told the BBC: "It's totally crazy! I thought it was great when I heard.