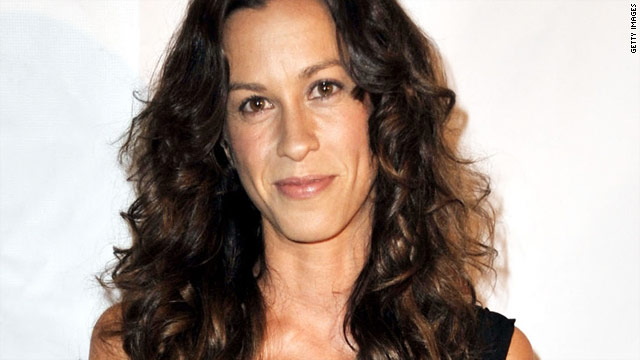 Alanis Morissette sat down with Health magazine to talk about how she turned around her unhealthy past.
STORY HIGHLIGHTS
RELATED TOPICS

(CNN) -- Alanis Morissette was the definition of "fierce" when she arrived on the American music scene with one of the big break-up songs of the '90s, "You Oughta Know." But behind that tough exterior were secrets of a difficult past.

"As a teen, I was both anorexic and bulimic," Alanis Morissette recently told Health magazine for its December issue. "I was a young woman in the public eye, on the receiving end of a lot of attention, and I was trying to protect myself from men who were using their power in ways I was too young to know how to handle."

By the time Morissette was 14, she had already starred in a popular Canadian children's show, started her own record label and had a publishing contract with MCA Canada, according to her Web site.

"Disappointment, sadness and pain hit me hard, and I tried to numb those feelings through my relationship with food. For four to six months at a time, I would barely eat. I lived on a diet of Melba toast, carrots, and black coffee," she said. "I began recovering at 18, when a sweet friend confronted me."

Now that she's older, Morissette, 35, said she's no longer starving herself and has begun to look at eating as "a sort of spiritual practice." Her healthier view of food and nutrition is thanks in no small part to a book she discovered a few years ago called "Eat to Live."

"It's become my bible, pushing me to completely reorient my thinking about what to put into my body. ... Now I concentrate on eating high-nutrient foods like fruit, nuts, collards, kale and spinach. I'm obsessed with them. I even put spinach in my smoothies," the Canadian musician admitted.

The seven-time Grammy Award winner has also sworn off dairy, on a tip from Woody Harrelson, no less. "Woody Harrelson [told] me I needed to get rid of the dairy in my fridge to clear up my skin," she said.

It's had a positive effect: Morissette said her skin "looks great now."

But all of that health consciousness doesn't mean Morissette has lost appreciation for the more delectable things in life. "Don't get me wrong," she said in the interview, "I still indulge in a glass of wine or chocolate -- treats are mandatory. Without deviating from the day-to-day healthy diet once in a while, it wouldn't be sustainable for me, and that's what I wanted: an approach to eating to last my entire life."

Resolving her issues with food and body image has helped Morissette to develop clarity in other areas of her life as well.

"I'm really clear about what my life mission is now. There's no more depression or lethargy, and I feel like I've returned to the athlete I once was. I'm integrating all the parts of me -- jock, musician, writer, poet, philosopher -- and becoming stronger as a result," she said.

"I hope my effort shows any woman battling an eating disorder or poor body image that she's not alone -- support is out there -- and inspires her to discover her inner athlete. It doesn't matter what your fitness-skill level is."