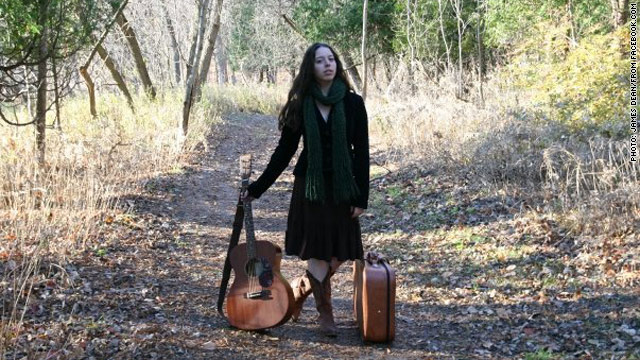 (CNN) -- Those who knew Canadian folk musician Taylor Mitchell say her passion for her craft was matched by her affinity for nature.

Fresh out of high school, she embarked upon a three-week tour of Eastern Canada earlier this month full of hope over her blossoming career and excited to explore the region with a new car and driver's license.

The 19-year-old rising star was in between gigs when, according to a Nova Scotia Cape Breton Highlands National Park official, she was killed by coyotes during a hike on Tuesday afternoon.

"If there can be any comfort at all, it is knowing that Taylor was doing two of the things she loved most, sharing story and song on the road and spending time in nature's fold," her manager, Lisa Weitz said in an e-mail. "She loved the woods and had a deep affinity for their beauty and serenity."

Mitchell was a "seasoned naturalist" well versed in wilderness camping who wouldn't want the coyotes responsible for her death to be killed, her mother said Thursday.

"When the decision had been made to kill the pack of coyotes, I clearly heard Taylor's voice say, 'please don't, this is their space.' She wouldn't have wanted their demise, especially as a result of her own. She was passionate about animals, was an environmentalist and was also planning to volunteer at the Toronto Wildlife Centre in the coming months," Emily Mitchell said in a statement Thursday.

"Tragically, it was her time to be taken from us so soon," the mother said.

When she was 15, Mitchell began vocal lessons with her future producer, Michael Johnston.

"Taylor inspired and impressed everyone from her musical peers to members of the Canadian roots-music community who were two and three times her age," he said in a statement.

"They saw in her the rarest of the gifts -- an ability to sing not only from the heart, but in a way that transcended her age and experience and became something universal."

The Toronto-based musician's career began to take off earlier this year after the April release of her debut album, "For Your Consideration."

She was nominated for Young Performer of the Year honors by the Canadian Folk Music Awards, which will be awarded in November.

On her Facebook page, she detailed her busy summer performance schedule, describing it as her "craziest summer yet."

In July, she said she took a Greyhound bus to perform in the Young Performers Program at the Winnipeg Folk Festival, her first show west of Ontario, which featured acts including Arlo Guthrie, Neko Case and Elvis Costello.

She played more shows in the Toronto area, relishing the airplay her album was receiving, and worked on songs for her next album, Weitz said.

Yet she managed to return to nature with her aunt, mother and best friend at the family cottage in Owen Sound, Ontario, delighting in its simple joys.

"Our cottage is on the shores of Georgian bay. It's 125 years old with three bedrooms that sleep two and one bedroom that sleeps four, plus a bunkhouse. It's old and creaky and absolutely beautiful. As I sit on my couch in my apartment, I'm homesick for the precariously slanted stairs, tennis courts, lake and wonderful memories," Mitchell said on her Facebook page.

Before she set out eastward for her tour of the Maritimes, she shared her works in progress at the Ontario Council of Folk Music conference in Ottawa, impressing all those in attendance, Weitz said.

"Taylor Mitchell's vocal style and consummate songwriting craft belied her vernal years. Indeed, her songs told the tales of a seeker, a sojourner with a sage wisdom atypical of most, let alone one of such tender years," Weitz said.

On her Facebook page, she had begun counting down the days to her East Coast tour in September, saying in a September 18 status update that she was "feeling the pull of the road."

In her last post on the site, she described playing a show in someone's home, calling it "a welcome dose of normality after a whirlwind weekend" at the Ontario Council of Folk Music.

Those closest to her said they'll derive inspiration from her passion for life.

"Taylor was my shining light, my baby, my confidante and best friend," her mother said. "I don't know how to move forward from here but I know that she would want that for me, and I will try to do that in her memory and celebrate her life in the way she lived it -- with passion, commitment and an unbridled loving heart."