'Once' again: The Swell Season sings of love, loss 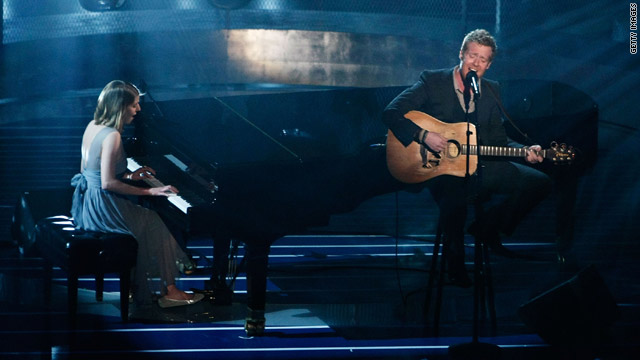 (CNN) -- Having been in love both on and off screen, Glen Hansard and Marketa Irglova know a lot about bittersweet romance.

The singer-songwriters, who charmed millions of moviegoers with their surprise indie hit film "Once" in 2007, are back with a new album called "Strict Joy" (Anti-) which delivers a slew of songs about past love. The album, which takes its name from a poem by James Stephens, was released this week in the United States.

Hansard, speaking with his soothing Irish accent from a hotel room in Los Angeles, California, to CNN this week, shared details of the album, his music-writing process, and his connection with Irglova.

He said some of the songs on this album are about himself and Irglova, who ended their romantic relationship last year but continued recording music together.

"That can be a little bit challenging sometimes when we're playing them, but we're so close as mates I think it's OK to report on your emotional sort of self without it being personal," he said. "The songs are just designed to be about where you're at personally."

Hansard, 39, and Irglova, 21, met in 2001 when Hansard's band the Frames from Ireland was touring Irglova's native Czech Republic. Her father, a concert promoter, invited the band to a party, where 13-year-old Irglova played a Mendelssohn piece on the piano, Hansard said. Impressed, he invited her to play with him at several other gigs.

He later suggested Irglova for the part of a Czech piano player in the movie "Once," directed by John Carney, the original bass player of the Frames, which has essentially merged with Irglova to become The Swell Season. The film showcased the musical collaboration between Irglova and Hansard, playing the roles of unnamed singer-songwriters who fall in love, but do not end up together.

There's nobody on this planet that I enjoy making music with more.
--Glen Hansard, about musical partner Marketa Irglova
RELATED TOPICS

The music-driven story was so touching that reports of their real-life romance while promoting the film were especially heartwarming for fans. The couple didn't hide it on stage either. At a New York performance in November 2007, the duo frequently exchanged starry-eyed looks during the concert, and walked offstage with their arms around each other's shoulders after the encore.

There were some awkward moments -- "thankfully they were private" -- between the two after they went back to being friends, but Hansard insists they're fine as pals.

"The romantic thing was great, it was a lovely adventure, but you know, if you're mature enough to sort of look someone in the eye and go, 'You know what, this isn't working' -- which she is and I know I'm getting there -- it actually frees you and allows you to go be mates," he said.

"It works out really much better because we've got a deeper understanding of who each other are," he said.

Visit their Web site to sample the new album

In recent months, Hansard and Irglova have tended to independently generate song ideas at their respective homes and then present them to each other, Hansard said. Before, they would have had more of an influence on each other's work, having "caught each other's ideas from the very birth of the idea."

But it's still good, he said. "Nowadays, it's more opinion and correction rather than getting excited about the original idea and just sort of running with it until it's finished," he said.

The Swell Season tends to be more folk than the Frames, Hansard said. The band takes its name from a Czech novel by Josef Skvorecky that he and Irglova enjoyed.

Hansard's personal favorite song from the new album, "In These Arms," which highlights the ethereal blend of their voices, came together in a day. It started with the central chorus line that Hansard had in his head that was "almost like a Johnny Cash refrain," he said.

"Then I played it for Mar and she was like, 'Oh that's beautiful, let's follow that,' and we sat at the piano and we just knocked out some chords, and I wrote the lyrics on that day, and we recorded it that evening," he said.

Another song, "The Verb," was resurrected from a Frames song from eight years ago that Hansard had abandoned because he thought it was too sad. When one of the other musicians suggested working on it while recording the new album, Hansard dismissed it again until Irglova sang the part at the end of the song.

"She added this whole dimension that I thought was very hopeful," he said.

Although Hansard's default mood for songs is "semi-sorrowful," things are actually going really well, and he's trying to get himself to write more about that.

"There's a reason I put 'Low Rising' first [on the album] because it's the one song I felt I got closest to that mood in -- which is like, 'It's all good.' "

The duo won the 2008 Academy Award for best original song from a motion picture for the movie's song "Falling Slowly," depicted in the film as an impromptu duet between Irglova and Hansard in a music store.

Hansard had no idea that particular song would become their most famous, but he remembers feeling proud of it when he wrote it. "And for that then to have gone on to be the song that basically brought us to the world has just been brilliant," he said.

Hansard said he hopes he and Irglova continue playing music together, although to a large extent it will be up to her, he said.

"There's nobody on this planet that I enjoy making music with more," he said. "The one thing that's never going to fade, if you like, is this connection musically," he said.