(CNN) -- A coalition of top musicians, including R.E.M. and Pearl Jam, want to know if their music was used by the U.S. military as part of controversial interrogation methods at the detention facility at Guantanamo Bay, Cuba. 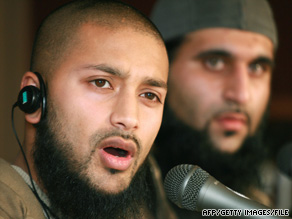 Ruhal Ahmed, left, shown at a 2007 news conference, says he had to listen to hours of music at Guantanamo.

The artists have endorsed a series of Freedom of Information Act requests, which were filed Thursday morning, asking the U.S. government to declassify documents that would reveal which artists' work was used on detainees at U.S. prison facilities and military detention centers, including the one at Guantanamo Bay.

The National Security Archive, a Washington-based independent research institute that advocates "for the right to know," filed the requests on behalf of the Close Gitmo Now campaign, which launched this week, the archive's senior analyst Kate Doyle said.

The multimillion-dollar national grassroots Close Gitmo Now campaign is aimed at pressuring members of Congress to support President Obama's endeavor to close the Guantanamo Bay prison. It is supported by a coalition of retired generals and liberal activists.

The requests are based on the testimony of former Guantanamo prisoners and guards, as well as declassified documents, that identified music from 35 artists -- ranging from AC/DC tunes to the theme from Sesame Street -- used in the interrogations of detainees, Doyle said. See a list of bands and songs involved (PDF)

"We do know that songs and bands' work has been used to abuse detainees, we know that," she said. She added that any information that the National Security Archive obtains "will add to the profile of this case."

The requests are being filed with "a dozen different agencies and components of the Department of Defense," Doyle said.

They ask for any documents "concerning the use of loud music during detention and/or as a technique to interrogate detainees at U.S.-operated prison facilities used in its War on Terror at Guantanamo, Iraq and Afghanistan during 2002-the present," according to a copy of the FOIA request obtained by CNN.

It is unclear if any of the artists plan to pursue legal action, but Doyle said she'd be "surprised if some of them weren't thinking about it."

Many of the artists supporting the campaign are no strangers to political activism, but this cause has hit close to home for some of them.

"We have spent the past 30 years supporting causes related to peace and justice. To now learn that some of our friends' music may have been used as part of the torture tactics without their consent or knowledge is horrific," the American rock band R.E.M. said in a statement posted on CloseGitmoNow.org. "It's anti-American, period."

Several former Guantanamo detainees have filed lawsuits against the U.S. government, saying they were tortured with numerous techniques, including loud music.

"It's very scary to think that you might go crazy because of the music, because of the loud noise," said Ruhal Ahmed, one of the former detainees who has filed a lawsuit. He said he had to listen to hours of headbanging music while held prisoner at Guantanamo in 2003.

The Pentagon has not responded directly to the allegations of torture involving music, but it has said that its policy has always been to treat detainees humanely.

Loud music has not been used at Guantanamo since the fall of 2003, following a Department of Defense review of detention operations and interrogation techniques, according to Maj. Diana Haynie, a Joint Task Force Guantanamo spokeswoman.

U.S. Attorney General Eric Holder has asked a federal prosecutor to examine whether the interrogations violated the law, and the White House said Obama will leave any decision on charges to the Justice Department. And the Obama administration announced it would put the FBI in charge of a special unit set up to question suspected terrorists under White House oversight.

All About Guantanamo Bay • Music