Garth Brooks out of retirement, to play Vegas

(CNN) -- Garth Brooks, one of the biggest country stars of all time, said Thursday he is coming out of retirement after nine years away from the music business, and will start a concert engagement in Las Vegas. 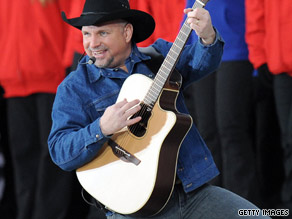 Garth Brooks performs during inaugural festivities in Washington in January.

At the Wynn, he announced he had agreed to a "series of special engagements," as a press release phrased it.

How it came about depended who you asked.

"Steve asked me to come out here," Brooks, wearing his traditional black cowboy hat, told the audience of reporters in Las Vegas, as he sat next to casino owner Steve Wynn on an auditorium stage. (Earlier, Wynn said Brooks had approached him.) Brooks sampled a room Wynn had suggested, putting on a show for more than 1,000 people, and said he was unsure about settling in for a long-term arrangement.

Watch Brooks talk about his decision to come out of retirement »

Brooks has three daughters -- 17, 15 and 13 -- to whom he's devoted, and he told Wynn he wanted to make sure he was home in Oklahoma to be with his children until the last one graduates from high school. So Wynn got Brooks a plane; the singer will work one show Fridays, two shows on Saturdays and one Sundays, and be back home for Monday morning.

"Did I tell you about the plane?" Brooks asked, more than once, when reporters inquired how he would pull things off.

The Vegas engagement is not a kickoff to a tour, according to spokeswoman Nancy Seltzer.

"If he tours again, it still won't be until his youngest goes to college," Seltzer told CNN via text message.

Brooks stressed that situation at the press conference. He won't be recording new albums or touring, he said: "The only place you'll see me is here."

Brooks, 47, was one of country's biggest stars in the 1990s. His albums, including "Ropin' the Wind," "The Chase" and "In Pieces," sold in excess of 100 million copies, according to the Recording Industry Association of America.

Brooks also was renowned for his concerts, which were energetic affairs in which he drove himself and his band hard.

Brooks has had his missteps, most notably a 1999 concept album credited to an alter ego rock singer, Chris Gaines. Though the album received positive reviews, his traditional audience didn't know what to make of it, and the rock audience didn't respond. A film about the life of Chris Gaines was shelved.

Brooks announced his retirement in 2000, saying he wanted to spend more time with his family. His last album of new material, "Scarecrow," came out in 2001, though he's lent his voice to occasional tribute singles and concerts, including a performance for President Obama's inauguration festivities this year.

Brooks is married to fellow country singer Trisha Yearwood, whom he wed in 2005.

Brooks will work at the Wynn Las Vegas 15 weekends a year. Every three months or so, Brooks said, he'll make a decision about continuing and exactly which weekends.

"As innocent and as simple as this business can be, is what this deal is," Brooks said.

Tickets will cost $125 a seat, Wynn said. The first show will be December 11. Tickets go on sale October 24.

All About Garth Brooks • Country Music