LONDON, England (CNN) -- British singer Leona Lewis was "understandably shaken" after a man attacked her during a book signing in central London Wednesday afternoon, a spokeswoman for her record label said. 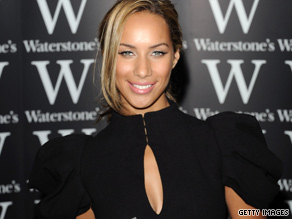 Leona Lewis was signing copies of her book "Dreams" when a man assaulted her, police say.

A 29-year-old man was arrested after he punched Lewis at the Waterstones bookstore in Piccadilly Circus at 4:36 p.m. (10:36 a.m. ET), according to a Scotland Yard statement.

She was signing copies of her new autobiography "Dreams" when the "unprovoked attack" happened, said Sarah Weinstein Dennison of the RCA Music Group.

"The police were called immediately, and medical attention has been sought," Dennison said. "Leona is understandably shaken and apologizes to the fans she was unable to meet and complete signings."

There was no information released on how seriously she was hurt.

The police statement said the man was arrested on "suspicion of assault occasioning actual bodily harm."

"He is currently in custody at a central London police station," police said.

Lewis, 24, got a career boost when she won the music talent competition on British television show "The X Factor" in 2006.

She got three Grammy nominations last year based on her debut album, "Spirit."

Her second album, "Echo," is set for release next month, according to her Web site.

All About Leona Lewis