(CNN) -- If Taylor Swift has any lingering insecurities after the Kanye West incident at the MTV Video Music Awards, the six nominations she received for the American Music Awards should clear those right up. 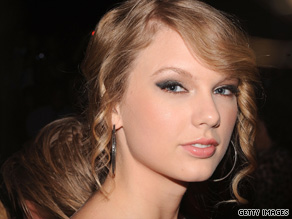 Taylor Swift received six AMA nominations. The honors will be given out November 22.

Paula Abdul, Snoop Dog and Adam Lambert announced the nominees for the 37th annual American Music Awards in Beverly Hills, California, on Tuesday, and Swift is up for favorite female artist in the pop, country and adult contemporary categories.

The 19-year-old singer, whose acceptance speech during the MTV VMAs was interrupted by West's onstage rant, also is in the running for the artist of the year award, up against Kings of Leon, Lady Gaga, Eminem, and the late Michael Jackson.

Jackson, whose single "This Is It" was released Monday, is nominated for a total of five awards, including artist of the year.

Eminem, who came back to music after a four-year hiatus, earned four nominations, including favorite album in the rap/hip-hop category for "Relapse," which dropped in May, 2009. Beyonce, the Black Eyed Peas, Lady Gaga, Kings of Leon and T.I. all received three nods each.

Winners will still be determined by online voting at the American Music Awards' Web site, amavote.com, as well as Mycokerewards.com. Voting starts today.

Fans can also place their ballots for their favorite "T-Mobile Breakthrough Artist." Newcomers Drake and Kid Cudi are nominated for the rap/hip-hop breakthrough award, and Kings of Leon and Lady Gaga were recognized in the pop/rock category.

Alicia Keys, Jennifer Lopez, the Black Eyed Peas and Adam Lambert will perform live at the AMAs on Sunday, November 22, which will be Lambert's first performance from his soon-to-be-released album.

"With the support of the artists and labels, we are looking forward to an amazing lineup of performances during this year's show highlighting the diversity and breadth of this year's eclectic music scene," the show's producers, Orly Adelson and Larry Klein, said in a joint statement.

Additional performances will be announced in upcoming weeks.