Michael Jackson tapes: Madonna 'is not a nice person'

(CNN) -- Michael Jackson was one of the most famous people in the world. Yet for all his global fame, the man himself was shrouded in mystery. 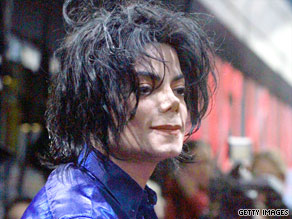 Michael Jackson in 2001, during the time period he was recording conversations with Shmuley Boteach.

Now some of that mystery has been peeled away. Jackson recorded about 30 hours of deeply personal thoughts with his friend and spiritual adviser, Rabbi Shmuley Boteach, between August 2000 and April 2001.

The results are the basis of a new book, "The Michael Jackson Tapes: A Tragic Icon Reveals His Soul in Intimate Conversation." Boteach joined CNN's Larry King in an interview aired Monday night that painted the pop star as a lonely, injured soul who craved adoration and love but was too damaged to find it.

Boteach's recordings also revealed Jackson's relationships with various family members and celebrities -- some of which were warm, others tense and others painful and dysfunctional.

When Jackson was recording his tapes, Madonna was not held in high esteem.

"She is not a nice person," Jackson told Boteach. Jackson revealed how he and Madonna had bickered about where they would socialize.

"Madonna laid the law down to me before we went out. [She said] I am not going to Disneyland, OK? That's out," Jackson said. "I said, 'I didn't ask to go to Disneyland.' She said, 'We are going to the restaurant. And afterwards, we are going to a strip bar.'

"I said, 'I am not going to a strip bar, where they cross dress. ... I am not going to there. If that's how it is, forget this whole thing. ... Afterwards, she wrote some mean things about me in the press. And I wrote that she is a nasty witch, after I was so kind to her," Jackson said.

King asked Boteach whether Jackson's opinion might have moderated on Madonna, especially in light of her warm comments at his memorial service.

"Well, let's be very fair to Madonna," Boteach said. "These comments by Michael were said about his experiences with Madonna years and years ago, when she had an extremely testy public image. She was the Material Girl, the bad girl. And I think Michael was reacting to that."

"[Brooke] was one of the loves of my life. I think she loved me as much as I loved her," Jackson said. "You know, we dated a lot."

Jackson went on to describe his first meeting with Shields and how thrilled he was that the woman whose picture was up on his walls invited him to a party after the Academy Awards.

"So we get to the after-party, she comes up to me and she goes, 'Will you dance with me?" and I went, 'Yes, I will dance with you.' So we went on the dance floor and we danced," Jackson said.

"And, man, we exchanged numbers and ... I was up all night singing, spinning around in my room, just so happy, you know. It was great."

Boteach said Jackson simultaneously held women in reverence and awe yet harbored deep suspicions about their motivations and his perceived their use of sexuality to achieve their goals. Those feelings didn't extend to Presley, however. Boteach played one of his conversations on this subject for King:

Jackson: "Women can do some things that make guys very unhappy. I see it with my brothers. I see my brothers crying in tears and pulling the grass out of the lawn out of frustration because of their wives."

Boteach: "Do you think all their wives were interested more in their success than in them?"

Jackson: "Absolutely. They were after their money. That's why I said to myself, 'I'll never be married.' I held out the longest. I stayed at home until I was 27, 28."

Boteach: "What was part of the attraction to Lisa Marie? That she had her own money? She had her own fame. You knew it wasn't about any of that."

Jackson: "Absolutely. She didn't take a penny, didn't want anything."

Jackson also talked on the tapes about his complicated relationships with his parents, especially his father, Joe Jackson.

Jackson described physical abuse at the hands of his father, including being stripped and oiled down before beatings with a iron cord.

"He would just whip you all over your face, your back, everywhere," Jackson told Boteach. "I would just give up, like there was nothing I could do, you know. And I hated him for it. I hated him."

Jackson also told Boteach that he and his sister Janet, as children, would pretend that their father was dead and make a game of how they'd react to his death. Michael said he'd ask Janet to picture their father in a coffin, and would ask her if that made her sad. She would repeatedly say it wouldn't, Michael said.

Yet there was more to the father-son relationship. Michael also said he gave a lot of credit to his father for his entertainment success and always held out hope for reconciliation and a loving relationship.

Boteach recalled one conversation he overheard when Michael called his father on the phone:

"I'm going to tell the world how you were responsible for my success. You taught me. You were a great manager," he recalls Jackson telling his father. "You taught me how to perform. You inspired me. You motivated me."

Boteach said that complicated relationship was at the root of many of Michael Jackson's problems and his obsession about children.

"I'm not here to judge Joe Jackson. He was raising nine children," Boteach told King. "But there can be no question that the devastating illustration given by Michael explains so much of his brokenness. Michael shared this, holding a tape recorder to his mouth, because he wanted the world to judge him more charitably."

Boteach said he ultimately broke off his relationship with the singer because he felt like Jackson was going down a self-destructive path and didn't want Boteach's advice or help.

The tapes also revealed other fascinating glimpses of the singer's psyche and thoughts:

• In one of the most stunning exchanges, Jackson suggests that he could have transformed Adolf Hitler's heart if he could have had an hour alone with the Nazi dictator.

• On then-meteoric Britney Spears: "I don't believe that she'll have any great longevity in the public eye because she doesn't understand the power of mystery."

• On his first girlfriend, Tatum O'Neal: "When I held Tatum's hand ... it was the most magical thing. It was better than kissing her."

• On being at the deathbed of Ryan White, the young boy who tugged at the nation's heart during his struggle with AIDS: "I took care of him. He stayed at my house. ... I said, 'Ryan, I promise to you I would do something in your honor on my next album. I will create a song for you. I will sing it. I want the world to know who you are.' I did "Gone Too Soon." That was for him."

• On his regard for children: "I would throw in the towel if it weren't for children and babies, you know. ... I've said it before, if it wasn't for children, I would choose death. I mean that with all my heart."

Despite the break in his relationship with Jackson, Boteach said he had high regard for the singer and the lessons they both learned during their sessions.

"The way I feel right now. I could cry right now listening to his voice again. You know ... Michael was trying to share with the world that our culture thinks somehow that fame and fortune are an acceptable substitute for love and affection," Boteach said. "But Michael discovered that these are empty gifts that leave you bereft."