ATLANTA, Georgia (CNN) -- Rims and bling? They're "super-played out," Common said, explaining that hip-hop is finding another direction and President Obama is helping point the way. 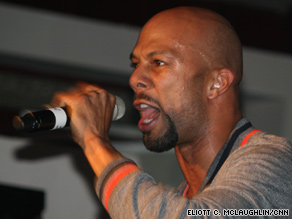 Rapper/actor Common says he is not hearing as much "gangsta talk" in hip-hop lately.

Common spoke of the "Obama effect" before a recent performance in Atlanta during the Hennessy Artistry Series.

The Chicago, Illinois-born rapper/actor, who has appeared in the movies "Wanted" and "American Gangster," spoke on a variety of topics, including the virtues of playing with live bands such as The Roots, who are co-hosting the series with him.

Watch why hip-hop should inspire »

However, he skirted questions about recent outbursts by rapper Kanye West and tennis star Serena Williams. West is a friend and fellow Chicago rapper who has produced two of Common's albums, and Williams is reportedly dating Common.

"People that I care about, that I consider being friends of mine, most of the things I discuss with them I wouldn't discuss in public because it's a real relationship," he said. "It's not a relationship for the public, you know?"

He did, however, spend a few minutes providing a progress report on Obama's influence on hip-hop. Nine months ago, Common told CNN he believed Obama's presidency would change the attitudes of many hip-hop artists.

"I think hip-hop artists will have no choice but to talk about different things and more positive things, and try to bring a brighter side to that because, even before Barack, I think people had been tired of hearing the same thing," he said in December. Read his December conversation with CNN

On Saturday, Common said he is already seeing signs that Obama is making a mark on a musical genre often vilified because of its focus on drugs, violence and the degradation of women.

"I also don't find as much gangsta talk," he said. "You see the whole chain-shining-and-rim era is gone. That's like super-played out. Just to have that, I think, is part of the Obama effect."

Also improving the industry, making it a more "independent-thinking entity," he said, is that record labels and corporations hold less sway over the production process than they have in the past.

Watch Common perform with The Roots »

"So you find these artists that are having that independent thinking of being able to go out and create for themselves," he said.

Common, born Lonnie Rashid Lynn Jr., believes hip-hop patrons want to hear more positive, upbeat messages in songs, and he believes the "conscious rapper" -- that is, the more socially aware -- is on the rise.

"People always want to feel better and be inspired," he said. "Sometimes we need it. I think the conscious rapper will always be able to live and exist."

Obama and the American spirit, he said, are prodding the movement along. Common said he hopes more rappers abandon vacuous materialistic ideals and the glorification of vices plaguing American communities -- "and if whatever MC doesn't, I will," he warned.

"I think Obama is definitely bringing people to be able to inspire people to create for themselves," he said. "What America was built on was being able to say, 'Hey, we're going to come in and use our resources to build for ourselves and our communities and build around that. We're not going to depend on others.'

"I think that's what hip-hop is starting to do to a certain extent. I think it's a great thing."