(CNN) -- Singer Nelly Furtado is trying to cross over in a direction many artists don't ordinarily take. 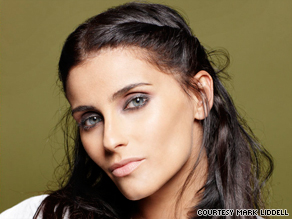 Singer Nelly Furtado says she enjoys diversity in music and broadening her fan base.

With "Mi Plan," the Grammy Award-winning singer is taping into a brand new market and fan base, almost a decade after she came to fame in 2000 with the single "I'm Like a Bird."

While the Canadian-born singer -- whose parents are Portuguese -- has sung in Spanish before, "Mi Plan" is the first time she has recorded an entire album in Spanish, a language she said she learned as a teen.

It's seems like a natural progression for Furtado, an artist often noted for diversity in her sound.

A few years after her breakthrough, Furtado teamed up with superproducer Timbaland for her 2006 album "Loose," a collaboration that gained her scores of hip-hop and R&B fans as well, and spawned hits such as "Promiscuous" and "Say It Right."

The first single off the album, "Manos Al Aire," made history as it marked the first time a North American artist reached No. 1 on Billboard's Hot Latin Songs chart with a song that was originally written in Spanish, rather than a translated version of an English-language song.

Furtado spoke with CNN about her passion for Spanish, why she feels like an artist reborn and the career path she hopes to take.

CNN: What was the inspiration for the new album?

Nelly Furtado: There were so many inspirations.

The language was the biggest inspiration. I've sang so much in Spanish in the past, and also Portuguese. I get a lot of joy in singing in Latin languages. It expresses the Latin side of me.

My parents were born in Portugal and they raised us in Canada. We grew up speaking Portuguese and then I learned Spanish at the age of 14. I love being a multicultural artist, I love being a global artist.

[The album] is almost like a literal reflection of that this time in the fact that it's all in Spanish and it's a completely original project written from scratch.

Furtado: Yes. It feels like a rebirth of sorts. It's almost like a parallel world where I get to reinvent myself again as an artist, but in a very whole kind of way. It's been a lot of fun.

CNN: You have such a loyal fan base. What do you hope they get from your latest project?

I'm an inclusive person and everyone is invited to the fiesta.

I'm excited because I am meeting brand new fans for the first time who don't have any of my prior albums. Four albums in, it's a tough job to try to attract new fans and I think that's what I am doing with this new music.

CNN: Did you consider it risky to do a Spanish-language album?

Furtado: I like to take risks. I live for risk taking and challenges.

I just find it so much more exciting and it keeps my job entertaining and interesting. Everyone is looking for that next challenge at work. Everyone wants that extra credential on their business card.

CNN: How is performing in Spanish different?

Furtado: When I express myself in Spanish or in Portuguese I feel very free.

There are a lot of things you can say in a Spanish song that you can't say in an English song, especially from a feminine perspective.

As a female, the moment you sing too passionately in English you are kind of labeled as an angry singer. In Spanish that doesn't happen. You can be dramatic as you want and it's accepted. So it's liberating.

CNN: There are a lot of Spanish-speaking artists who want to cross over into the English-language market. How does it feel to be doing the reverse?

Furtado: I think I'm capitalizing a little bit on the inroads I have already made in the Latin world through working with other established Latin acts.

I dabbled in Spanish on my third album. I had two records on there in Spanish and I really enjoyed writing them and playing them live. I'm just going where my heart's at and following the passions.

Furtado: It's interesting because when I got off the road from touring with my third album, "Loose," I was exhausted. I tried to write some songs in English and no inspiration really came to me.

Then I started writing songs in Spanish and it started flowing, so this album has been like a medicine of sorts. I'm so excited about music now.

I can't wait to put out another project in English and further Spanish albums as well as Portuguese. The list is never-ending.