LOS ANGELES, California (CNN) -- Seventy days after his sudden death, Michael Jackson will be interred in what may or may not be his final resting place Thursday evening. 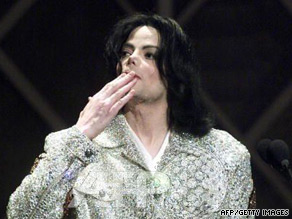 A private funeral for Michael Jackson will be held Thursday in Glendale, California, his family says.

Only his family and closest friends will attend the private burial starting at 7 p.m. PT (10 p.m. ET) inside the ornate Great Mausoleum on the grounds of Forest Lawn cemetery in Glendale, California.

They'll then drive to an Italian restaurant eight miles away in Pasadena, California for "a time of celebration," the nine-page engraved invitation said.

The first page inside the invitation holds a quote from "Dancing the Dream," a book of essays and poems published by Jackson in 1992:

The news media -- which have closely covered every aspect of Jackson's death -- will be kept at a distance, with their cameras no closer than the cemetery's main gate. The family will provide a limited video feed that will only show mourners arriving.

Little is known about the planned ceremony, though CNN has confirmed that singer Gladys Knight -- a longtime friend to Jackson -- will perform. Her song has not been disclosed.

'Man in the Mirror'

The massive mausoleum, which is normally open to tourists, was closed Wednesday as preparations were completed for the funeral. A security guard blocking its entrance said it would reopen to the public on Friday.

Fans of Clark Gable, Carole Lombard and dozens of other celebrities buried on the grounds have flocked to Forest Lawn-Glendale for decades, but Jackson may outdraw them all.

It is unclear how close tourists will be allowed to Jackson's resting place. Security guards -- aided by cameras -- keep a constant vigil over the graves and crypts, which are surrounded by a world-class collection of art and architecture.

The Forest Lawn Web site boasts that the mausoleum, which draws its architectural inspiration from the Campo Santo in Italy, "has been called the "New World's Westminster Abbey" by Time Magazine.

Jackson's burial has been delayed by division among Jackson family members, though it was matriarch Katherine Jackson who would make the final decision, brother Jermaine Jackson recently told CNN.

He preferred to see his youngest brother laid to rest at his former Neverland Ranch home, north of Los Angeles in Santa Barbara County, California.

That idea was complicated by neighbors who vowed to oppose allowing a grave in the rural area -- and by Jackson family members who said the singer would not want to return to the home where he faced child molestation charges, of which he was ultimately acquitted.

The mystery of where Michael Jackson would be buried became a media obsession in the weeks after his death.

After his body was loaded onto a helicopter at UCLA's Ronald Reagan Medical Center hours following his June 25 death, it stayed in the custody of the Los Angeles County coroner for an autopsy.

It was only later disclosed that Jackson's corpse was kept in a refrigerated room at the Hollywood Hills Forest Lawn cemetery until his casket was carried by motorcade to downtown Los Angeles for a public memorial service in the Staples Center arena.

Again, speculation about Jackson's whereabouts grew when the media lost track of his casket after his brothers carried it out of sight inside the arena. Though the family has not publicly confirmed where the body was taken, most reports placed it back at the Hollywood Hills Forest Lawn while awaiting his family's decision.

Though Thursday's interment may settle one Michael Jackson mystery, a more serious one remains. The coroner announced last week that he had ruled Jackson's death a homicide. A summary of the coroner's report said the anesthetic propofol and the sedative lorazepam were the primary drugs responsible for the singer's death.

Los Angeles police detectives have not concluded their criminal investigation and no one has been charged.