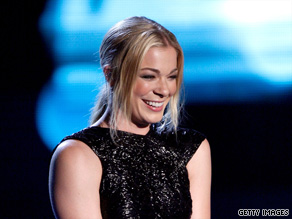 LeAnn Rimes confirmed on her Web site that she and her husband, Dean Sheremet, are divorcing.

CNN was not able to immediately reach Rimes' representatives to confirm the announcement, posted Tuesday.

"After much thoughtful mutual consideration, Deane and I have agreed to move forward with dissolving our marriage," the statement said, referring to Dean Sheremet. They've been married for seven years.

"This decision was amicable and we remain committed and caring friends with great admiration for one another," the message added.

Rimes, a Grammy Award-winning singer best known for her songs, "How Do I Live" and "Can't Fight the Moonlight, " met Sheremet, a backup dancer, when she hosted the Academy of Country Music Awards in 2001, at age 18.

After one date, she told InStyle magazine: "This is the guy I want to marry." They did so the following year. The two have been separated since July.

In recent weeks, Rimes has been linked to Eddie Cibrian, her co-star in the TV movie "Northern Lights."

Cibrian filed for divorce from his wife, Brandi Glanville, on August 24. They had been married for eight years.

All About LeAnn Rimes