(CNN) -- Aerosmith announced the cancellation of the remainder of its summer tour Thursday, more than a week after the band's lead singer tumbled off stage in South Dakota. 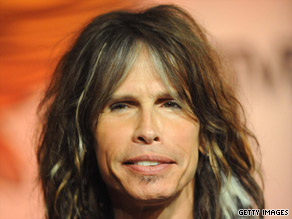 Aerosmith lead singer Steven Tyler fell off stage August 5 while dancing to "Love in an Elevator."

"Due to injuries Steven Tyler sustained last week when he fell from the stage during a concert in Sturgis, South Dakota, doctors have advised the lead singer to take the time to properly recuperate from the accident that resulted in a broken shoulder and stitches to his head," the band said in a statement.

The accident happened August 5 during a concert at the Sturgis Motorcycle Rally in western South Dakota.

Tyler was dancing during "Love in an Elevator" when he fell. He was airlifted to a local hospital for initial treatment before returning to Boston, Massachusetts, for treatment with his own doctors.

"Words can't express the sadness I feel for having to cancel this tour," said guitarist Joe Perry. "We hope we can get the Aerosmith machine up and running again as soon as possible."

"We never anticipated this tour coming to such a swift and unfortunate ending," guitarist Brad Whitford said. "Our thoughts and prayers go out to Steven for a speedy recovery and return to good health."

Tyler's fall was the second mishap for the lead singer during their tour with ZZ Top. Five shows were postponed in July after Tyler sprained his leg.

The band said refunds will be issued for all canceled shows.