(CNN) -- After 20 years of mega-success together, country duo Brooks & Dunn say they are done. 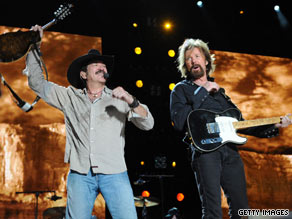 Kix Brooks and Ronnie Dunn have decided to call it quits as a country singing duo.

In a statement on their Web site, the pair said they will tour one last time next year as a goodbye to fans -- and then call it a day.

The decision to part was mutual, the duo said.

"If you hear rumors, don't believe them, it's just time," the Web statement said.

Kix Brooks and Ronnie Dunn were successful singer-songwriters in their own right when they joined forces and scored their first hit as a duo with their 1991 debut CD, "Brand New Man."

Since then, they have released more than a dozen albums, had 20 No. 1 hits and won the Country Music Association's Vocal Duo of the Year award every year from 1992 until 2006 -- with their streak broken just once in 2000.

"The Last Rodeo" tour will begin in 2010, but dates have not been announced.

All About Country Music Association