By Richie Havens
Special to CNN 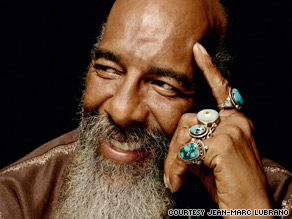 Folk singer Richie Havens gave the opening performance at the Woodstock Festival 40 years ago in August 1969.

(CNN) -- Forty years ago this summer I wound up opening the Woodstock festival when the four acts scheduled before me were stuck in massive traffic jams and delayed in getting to the concert site in Bethel, New York.

My band had made it up from Manhattan in the early morning hours and we had the least amount of gear to set up, so after some strong convincing from the promoters I agreed to go on.

The show was late in starting and they were feeling pressure to start the music. We played for nearly three hours as they were still building the stage around me. I sang every song I knew, and when they asked me to go back on one more time, I improvised "Freedom."

When you see me in the movie tuning my guitar and strumming, I was actually trying to figure out what else I could possibly play! I looked out at all of those faces in front of me and the word "freedom" came to mind.

One of my strongest memories of that day is flying in the helicopter over that vast, spectacular crowd that had already stretched back over the hills and well out of view of the stage. Looking down, my only thought was, "This is incredible... we're really here and they can't hide us anymore."

I've been asked all summer long if I believe Woodstock is still significant and if I think another Woodstock is ever likely to happen. Well, certainly large three-day festivals are still happening all over: Coachella and Bonnaroo in the United States, the Isle of Wight and Glastonbury abroad, but the reality of what made Woodstock become such a historical event has definitely changed.

Woodstock happened in August 1969, long before the Internet and mobile phones made it possible to instantly communicate with anyone, anywhere. It was a time when we weren't able to witness world events or the horrors of war live on 24-hour news channels.

News coverage was filtered and selective, and we felt manipulated and silenced by the lack of information. So much was happening around us and we didn't feel like we were being told the truth.

With everything that was going on in the late 1960s -- the war in Vietnam, civil and human rights issues, the Rev. Martin Luther King Jr.'s assassination -- we rallied and relied on strength in numbers. We came together communally to be heard and to be acknowledged.

Though it's frequently portrayed as this crazy, unbridled festival of rain-soaked, stoned hippies dancing in the mud, Woodstock was obviously much more than that -- or we wouldn't still be talking about it in 2009. People of all ages and colors came together in the fields of Max Yasgur's farm.

Some traveled for days or weeks to get there. The world was quickly changing and none of us were willing to sit and just watch it go by. We needed to feel like part of the change and that spontaneous coming together felt like the world's biggest family reunion!

When Wavy Gravy said "What we have in mind is breakfast in bed for 400,000," that's what it felt like: hundreds of thousands of friends and loved ones taking care of one another. Woodstock was both a peaceful protest and a global celebration.

The opinions expressed in this commentary are solely those of Richie Havens.

All About Woodstock • Folk Music • Vietnam