LOS ANGELES, California (CNN) -- Holly Williams is one of the only artists in country music male or female who doesn't have a stylist. But then again, she might be the only entertainer in Nashville who owns a clothing boutique. 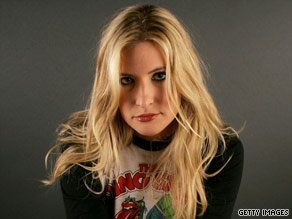 The chic women's store is named H. Audrey after her maternal grandmother, who was the first wife of the late country music icon Hank Williams. Holly's father is Bocephus -- the legendary hellraiser and three-time CMA Entertainer of the Year otherwise known as Hank Williams Jr.

She got her height from him. With heels on, she's about 6-foot-3 -- all tanned legs and long, blonde hair. She looks like a star. And at 28, she wants to earn the right to be one.

Williams just released her sophomore album, "Here With Me" (Mercury Nashville). Most of the 11 tracks are self-penned, and she sings them with emotional honesty in a smoky, soulful voice. The characters in her lyrics are friends, family and lovers from the past. She also has a man in her present: On July 24, she became engaged to Chris Coleman, the drummer in her band.

Watch Williams show off her talents »

Williams spoke with CNN about her new album and her family's legacy. The following is an edited version of the interview.

CNN: Your new album was released the same day as your dad's new album. Was that planned?

Holly Williams: It wasn't planned at all. About three weeks before my release, I was looking over to see who else was coming out that day, and it said, "Hank Jr." -- and I'm going, "Is this something my manager planned?" And it's just so random, because out of the 52 weeks of the year, it just happened.

CNN: What did he think about the album?

Williams: Well, this is embarrassing, but I haven't sent him a copy yet! I need to. He's heard two of the singles. He's always been a huge supporter of the songwriting, and just been a great encourager with me.

CNN: What was it like when you were growing up?

Williams: Well, my mom raised my sister and me. [My parents] split when we were 3 and 5, and he was touring 300 nights a year. We'd see him every few months when he was off the road, and we'd go up there and hunt and fish and be on the farm. But my mom did all the rules and curfews and all that.

CNN: Your mother doesn't seem jaded by the music industry at all.

Williams: Oh, she doesn't at all. They split in '83, so when they first got married in '77, he was still a struggling artist and doing small theater shows. My single out right now is called "Mama" that I wrote ... is kind of a thank-you song, because she was always the most positive influence -- had so much light. My dad always talks about what a great mom she was, and they're still close friends.

CNN: What was it like for you going into the music industry? Was there a lot of pressure?

Williams: The songwriting hit me at a very young age. Eight, 9, 10 is when I started writing. Went away from it for a few years, and at 17 picked up a guitar and it was just on from there. I'm 28 now, and I've been doing it for 10 years nonstop. I put out an EP myself when I was 20, and paid 200 bucks for my Web site, and traveled over in the U.K. alone with a backpack.

And in the U.S., I just took my mom's Suburban and followed everyone from Train, John Mellencamp, Billy Bob Thornton -- everyone's bus -- and just did any show I could, whether they paid or not. Just played, played, played.

CNN: Do you remember the first song you wrote when you were 8?

Williams: I do. The first song I wrote was called "Who Am I," and it's funny because it was very serious. I had a very happy childhood, but it was very introspective about this broken marriage, and I wanted Tiffany or Debbie Gibson to cut it. I remember just telling my mom, "Just please call the publishing company. ... "I was so ambitious. I remember making cassette tapes and mailing them to Music Row.

CNN: What was the reaction from those tapes?

Williams: I'm sure there was never any response. I'm sure people just laughed. I was not as talented as Taylor Swift when I was 15, 16. I could write a decent song, but I couldn't sing that well at that age.

CNN: You have a love for rock 'n' roll. Why did you go into country with this album?

Williams: Growing up in my house, you would assume I was growing up around country music with my dad being Hank Williams Jr. But he did not bring music home. He always said, "I'm not Bocephus to you. I'm Daddy." So I was really left to my own devices to find music on my own.

And I really fell in love with the singer-songwriters of the '70s -- Tom Waits, Neil Young, Jackson Browne, Bob Dylan, Joni Mitchell, Carole King -- that whole era really struck me. And when I heard Hank Williams Sr.'s name mentioned from those people -- from Leonard Cohen to Bruce Springsteen -- that's what really brought me back around to learning more about my grandfather.

My music is still based in that singer-songwriter tradition. Adding a fiddle and steel guitar makes it more country, and adding blazing electric guitars makes it more rock. I'm on a country label now.

CNN: You also own a clothing boutique in Nashville called H. Audrey.

Williams: Everything I have on, except my shoes, is from there. ... It's a struggle in this economy, but we make enough to pay our payroll and buy the clothes. And it's nice to fold jeans every now and again, and get my mind out of myself.

CNN: When you're writing down your goals on your wish list, what is it you really want?

Williams: I would love to sell a million records. I would love to play in arenas -- but what I really want to build is a core fanbase, and just hopefully build a place in the Williams family.