LOS ANGELES, California (CNN) -- Michael Jackson's ex-wife and the mother of his two oldest children, Debbie Rowe, has agreed not to challenge the singer's mother for custody of the children, according to a joint statement from lawyers for Rowe and Katherine Jackson. 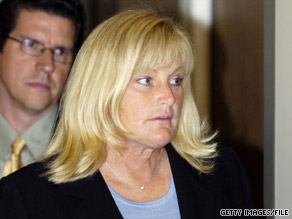 Debbie Rowe will not pursue custody of the children she bore with Michael Jackson, a lawyer says.

The agreement does not involve any financial payments to Rowe "apart from the continuation of spousal support payments" that Michael Jackson personally agreed to make to Rowe after their divorce, the lawyers said.

Rowe will get visitation rights with the children and the "timing, frequency and manner of visits shall be implemented according to the best interests of the children, as determined by a child psychologist selected jointly, and paid jointly," by Jackson and Rowe, the announcement said.

Rowe never publicly said if she would fight Jackson's 79-year-old mother for custody of her son and daughter -- ages 11 and 12 -- and a court hearing concerning custody was delayed several times this month while lawyers for the two talked. Jackson's youngest child, 7, was carried by a surrogate mother, whose name has not yet been released.

Learn about other notable custody cases »

The agreement must be approved by the judge. A custody hearing is set for Monday before Los Angeles County Superior Court Judge Mitchell Beckloff.

Beckloff will also hear arguments Monday about Jackson's estate and who will control it. Katherine Jackson is asking the court for more involvement in the estate's business.

Watch what may have happened in Jackson's final hours »

Jackson family lawyer Londell McMillan said the family was pleased the custody matter was "resolved and was handled in a caring, thoughtful and courteous manner by the parties and their representatives."

Michael Jackson's personal chef, who was at his home the night he died, reveals her personal account of what happened.
Tonight, 9 p.m. ET

"We were all united in our goals to do what is best for Michael's wonderful children, and both Mrs. Jackson and Debbie Rowe were on the exact same page," McMillan said. "Accordingly, although important issues had to be resolved, this was no legal contest but rather simply a process (of) doing the right thing for the right reasons."

"The sole consideration between the parties was the best interests of the children," George said. "I'm proud to have worked with such professionals who represented Ms. Jackson, and I am particularly proud of Deborah for her integrity and selflessness."

Efforts to resolve who will control Jackson's estate have not been so amicable.

Earlier this month, Beckloff granted temporary control to the executors named in his 2002 will: John Branca, Jackson's longtime personal attorney, and John McClain, a music industry executive and longtime friend.

McMillan, in a statement issued Wednesday, said Katherine Jackson was not disputing the will. But, he said, she wanted the judge to order the executors to disclose information about what he said was "a suspicious circle of relationships" involving them.

He said the executors "have either denied Mrs. Jackson access to critical information or insisted on ... onerous and unreasonable restrictions" to information about deals they are making on behalf of the estate.

The will placed all assets into a family trust benefiting his mother, his three children and unnamed charities.

Jackson's children have been living with their paternal grandmother at her Encino, California, home since their father's death on June 25.

"They read the news on the Web and the reports," McMillan said. "I really tried to push the media to be responsible in how they try to handle this matter because there are three precious children involved."

Details of how the children were conceived -- and who was the biological father -- have been closely guarded amid much public speculation.

The couple divorced in 1999 with Rowe giving Jackson full custody while she got an $8.5 million settlement, according to court documents. Jackson later agreed to additional support.

Rowe gave up parental rights to Jackson in 2001, but she changed her mind more than two years later and sought temporary custody of the children. A California appeals court later ruled her rights were improperly terminated, opening the door to a possible custody battle.

All About Michael Jackson • Debbie Rowe