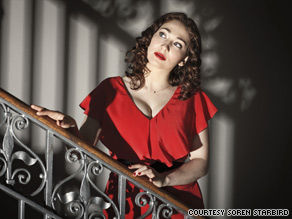 "I play most of my songs with my eyes closed," says the Moscow, Russia-born singer-songwriter.

Perhaps, but here's a musician who's known for being a little quirky.

On the track "Folding Chairs" off her new album, "Far" (Sire Records) Spektor imitates the sound a dolphin makes. And in the music video for her peppy song "Dance Anthem of The '80s" she gets her face so close to the camera that at times you think she's going to gobble it up.

But in person, the classically trained pianist is shy and soft spoken. And she recalls her third album's debut last month at No. 3 on the Billboard album chart -- a career high -- with genuine surprise.

Watch an interview with Regina Spektor »

"I was in England when I found out," she says. "It was just very, very trippy."

Spektor invited CNN to crash the set at AOL's New York headquarters last week where she was filming a live performance for the music show, "The Interface."

She talked about the floppiness of the '80s and what it's like to be a songwriter who never writes anything down. The following is an edited version of the interview.

CNN: Your song "Eet" is about forgetting the lyrics to your favorite song. Do you ever forget the lyrics of your own songs when you're performing?

Regina Spektor: Yeah. I forget a lot. I try not to. I practice, but it all depends on how much coffee I've had before. Sometimes when I get the balance wrong, then all of a sudden all my songs become a mystery to me. It's like the teleprompter inside my head just goes off and I can't remember anything.

CNN: So what are you thinking about when you're performing with your eyes closed?

Spektor: I'm not really thinking that much of anything. I'm sort of in this state that's between thought and feeling. I think it's more of a feel state than a think state.

CNN: Your song "Dance Anthem of the '80s" is very cute. Did the music of that decade make a big impression on you?

Spektor: Yeah, I think because I spent all the '80s in the Soviet Union, my '80s were the '90s...even the beginning of 2000 actually. But I just love the fun of it. I think that it's not so dark and "me." It's very extroverted and it just doesn't take itself seriously. Fun, weird sounds and fun hair, and floppy everything.

Even though artistically it was really a fun decade, I think economically it was a very dangerous decade. It was a time of big, fast spenders and people who just didn't really think about the consequences of their greed.

CNN: What was the appeal of working with four different producers for your new album?

Spektor: Well, I sort of figured that since I get to make albums pretty rarely -- so far it's been one every three years - that I should take as much opportunity as I can and learn from people. I loved working with David Kahn on the last record, "Begin to Hope." And then this time I worked with him and then three more producers and just tried to learn as much as I could from each one.

CNN: Was there any concern that the album might not sound cohesive?

Spektor: No. I don't know why everybody wants things to be cohesive in the first place. I really love different things, and I think that things feel great when they're thrown in contrast. That's how you let one thing fulfill the other. I like things that are just all over the place.

CNN: Is it true that when you're creating a song you don't write anything down?

Spektor: Yeah, but I wouldn't say that's a good thing. I think it's pretty stupid. I just sort of play it over and over again until it's cemented in my head. I'm not good about writing stuff down. I don't know. I think it's some sort of laziness. It's how I forget a lot of stuff.

CNN: But it seems to work. The good ones stick.

CNN: So when do you know you have something that's worth recording?

Spektor: I feel that feeling all the time that I need to record before I forget it. I've actually gotten better because I used to just have to hold the songs in my head until the next time I would record them. But now I have a laptop and I've learned how to do GarageBand. It remembers for me.

CNN: How involved are you with coming up with the concepts for your music videos?

CNN: You just showed up?

Spektor: No I've never been that not involved. I guess my not involved at all is still very involved. I think it's really cool that musicians get to make music videos because it's our chance to learn about cameras and cinematography and this whole other world that goes on. My first ever video which was for a song called "Us" I made with my friend Adria Petty. We're always coming up with things together. We kind of incubate and make a lot of art together, share ideas.

But it's really fun the other way, too, like when I made a video with Mark Webb for "Fidelity." That was really cool because he had listened to the song and the video concept was his idea. And I just got to come in and be directed more, be part of his take on a song, and that was really fun, too.

CNN: On your song "Folding Chairs," you impersonate a dolphin. How did that happen?