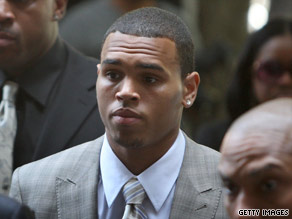 Brown, 20, was arrested after an early morning argument inside a rented Lamborghini on a Hollywood street in February.

He admitted guilt to a felony assault charge in June in a plea deal under which he will serve five years of probation and do about 1,400 hours of "labor-oriented service." Sentencing is set for August 5.

A publicist for Rihanna, whose real name is Robyn Rihanna Fenty, has not responded to CNN requests for comment on the apology.

Brown, in the two-minute video, said he had wanted to "publicly express my deepest regret and accept full responsibility" since February, but he remained silent on the advice of his defense lawyer.

"Although I will do some interviews and answer some questions in the future, I felt it was time you heard directly from me that I am sorry," he said.

"I have tried to live my life in a way which can make those around me proud of me, and until recently, I think I was doing a pretty good job," Brown said. "I wish I had the chance to relive those few moments again, but unfortunately I can't. I cannot go into what happened, and most importantly, I'm not going to sit here and make any excuses."

The incident began when Rihanna, who was riding in the sports car driven by Brown, found a text message on his cell phone from "a woman who Brown had a previous sexual relationship with," according to a sworn statement by Los Angeles Police Detective DeShon Andrews.

"A verbal argument ensued," followed by the physical attack, the statement said. It went on to describe the assault in great detail, saying Brown punched Rihanna numerous times and put her in a headlock, restricting her breathing and causing her to start to lose consciousness. He threatened to beat her and kill her, according to the statement, and he bit her ear and her fingers.

Eventually, "Robyn F. began screaming for help and Brown exited the vehicle and walked away," the statement said. "A resident in the neighborhood heard Robyn F.'s plea for help and called 911, causing a police response. An investigation was conducted and Robyn F. was issued a Domestic Violence Emergency Protective Order."

"I take great pride in me being able to exercise self-control, and what I did was inexcusable," Brown said in his video apology. "I am very sad and very ashamed of what I've done. My mother and my spiritual teachers have taught me way better than that."

Brown, who lost several product endorsements after his arrest, said he realizes he has "truly been blessed" and he intends "to live my life so that I am truly worthy of the term 'role model.' "

"As many of you know, I grew up in a home where there was domestic violence, and I saw firsthand what uncontrolled rage can do," he said. "I have sought and I am continuing to seek help to ensure that what occurred in February can never happen again. And as I sit here today, I can tell you that I will do everything in my power to make sure that it never happens again. And I promise that."

His probation requires that Brown complete domestic violence counseling. The judge said he cannot have contact with Rihanna again until that is completed.