LOS ANGELES, California (CNN) -- The Beastie Boys canceled all scheduled concerts and delayed their next album release while member Adam "MCA" Yauch is treated for a cancerous tumor in a salivary gland, Yauch says in a video statement to fans. 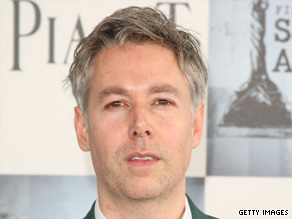 The Beastie Boys' Adam Yauch will be treated for a cancerous tumor in a salivary gland.

"The good news is that they did scans of my whole body and it's only localized in this one area and it's not in a place that affects my voice," Yauch says. "So, that's nice. That's convenient."

The cancer is in his left parotid gland and "also in a lymph node right in that area," he says.

He will probably have surgery next week and radiation treatments afterward, he says.

With band mate Adam "Ad-Rock" Horovitz sitting next to him, Yauch tells fans how he found out he had cancer.

His doctor sent him to a specialist who diagnosed the cancer, he says.

Yauch does not estimate how long the tour will be delayed, but he apologizes to "anyone who's made plans" to come to the shows.

The illness will also delay the release of the band's next album, "Hot Sauce Committee Part 1," he says.

All About The Beastie Boys