LOS ANGELES, California (CNN) -- They poured in to Los Angeles from places far-flung, an army of Michael Jackson fans hoping to collectively mourn their idol in a massive ceremony at the Staples Center downtown Tuesday. 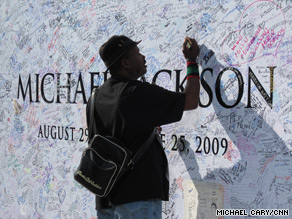 A fan leaves a note on a Michael Jackson memorial outside the Staples Center in Los Angeles.

The singer's memorial service Tuesday will be a star-studded affair, with singers Mariah Carey, Usher and Stevie Wonder among the participants, according to an announcement released on behalf of the Jackson family.

Also participating in the event will be basketball stars Kobe Bryant and Magic Johnson, and singers Jennifer Hudson, John Mayer and Smokey Robinson, the family said.

The Rev. Al Sharpton and Martin Luther King III will be among others taking part.

Ken Ehrlich, known for producing the Grammy Awards, is producing the memorial show, his company said. Kenny Ortega, who was to have co-directed Jackson's series of concerts in London, England, this summer, will direct it.

Mayer posted on Twitter on Monday afternoon saying "I'm going not to 'perform' but to contribute."

"I'm honored to have been asked to play at MJ's memorial service. I will be representing all of us who can't be there," Mayer tweeted. "Going to say goodbye from all us kids."

One notable who won't be attending: longtime Jackson friend Elizabeth Taylor, who put out a message on Twitter that she "cannot be part of the public whoopla."

"I just don't believe that Michael would want me to share my grief with millions of others," Taylor tweeted. "How I feel is between us. Not a public event."

"I love him too much," she added, "and I cannot guarantee that I would be coherent to say a word."

Debbie Rowe, Jackson's former wife and the mother of his two oldest children, will not attend the memorial service, her lawyer Marta Almli said Monday.

"Although Debbie had originally planned to attend tomorrow's Staples Center memorial service, we have concluded with Debbie that she will not be attending," a statement from Almli said. "The onslaught of media attention has made it clear her attendance would be an unnecessary distraction to an event that should focus exclusively on Michael's legacy. Debbie will continue to celebrate Michael's memory privately."

Fans without tickets to the memorial are being asked to stay away from downtown Los Angeles and watch the service on television.

Details: See who will be there, map of area »

The family decided to provide a free live video feed to networks so it would be televised everywhere. "Everything about the memorial has to do with accommodating as many fans as possible," Ken Sunshine, the Jackson family spokesman, said.

While Jackson's family remains tight-lipped about the singer's burial arrangements, sources told CNN that relatives will hold a private gathering at the Forest Lawn cemetery in Los Angeles Tuesday morning ahead of the public service. The California Highway Patrol will escort their motorcade, the sources said.

The gathering is scheduled for 8 a.m. (11 a.m. ET) -- two hours before the service at the Staples Center arena.

Cemetery officials have not commented on the matter.

While there are five Forest Lawn cemeteries in the Los Angeles area, media trucks and crews have been parked at the gate of the Hollywood Hills facility for several days in anticipation of Jackson's possible interment there.

On Monday, fans chosen by random lottery for Jackson's memorial began arriving at Dodger Stadium in Los Angeles to pick up their tickets. Full story

One person tried to pass off a photocopied voucher; he was ejected, Murphy said.

The 8,750 fans have until 6 p.m. PT to claim their tickets. iReport.com: "Surreal journey" to get Jackson tickets

Each winner gets two tickets, bringing the number awarded in the lottery to 17,500.

Just 11,000 of those are for seats inside the Staples Center. The other 6,500 would be for viewing the memorial telecast at the adjacent Nokia Theater. AEG Live, the promoter of Michael Jackson's London shows, owns and operates both venues.

Deka Motanya, 27, who works in a doctor's office in San Francisco, scrambled Sunday night to line up plane tickets so she and her boyfriend could fly to Los Angeles on Monday.

A Los Angeles Superior Court judge granted control of Jackson's assets to the executors of his will Monday.

The executors -- John Branca, Jackson's longtime personal attorney, and John McClain, a music industry executive and longtime friend -- had sought immediate control of the entertainer's assets at a hearing before Judge Mitchell Beckloff.

The judge appointed the men as special administrators until another hearing August 3. He said they will be responsible for protecting the estate from immediate losses.

The men can enter into new ventures only with court approval, Beckloff said.

Jackson died June 25. Since the next day, his mother, Katherine, has been administering the assets.

Lawyers for Jackson's mother objected to Beckloff's decision, saying that "irreparable damage" could be done to the estate if Branca is allowed to take control.

"To award unfettered control to the other side would not serve justice," said attorney Burt Levitch.

Katherine Jackson's lawyers argued that Branca was removed from several critical roles by Jackson after the signing of the will. They argued that the removal from those business roles should also exclude Branca as executor.

"Quite frankly, Mrs. Jackson has concerns about handing over the keys to the kingdom," Levitch said.

But Branca's lawyer, Paul Hoffman, said Branca had represented Jackson off and on since he was 21, that he was his lawyer at the time the will was written and that he was rehired in mid-June.

Branca represented Jackson from 1980 until 2006 and was hired again before the singer's death. He helped acquire Jackson's music catalog, which is worth millions.

McClain is a longtime Jackson friend who has worked with him and his sister Janet.

The judge ruled that Michael Jackson felt strongly enough about these executors to name them in his will. He required the two men to acquire a $1 million bond to insure their work as executors.

The judge said he hopes the two sides can come to an agreement -- a "free flow of information" -- by August 3.

Hoffman said the two sides met for four hours over the weekend but were unable to reach "an acceptable accommodation."

In their filing for control of the estate, the men said it would allow them to tend to Jackson's numerous outstanding debts, legal cases and business obligations.

At a hearing Wednesday, Beckloff had appointed Katherine Jackson the temporary administrator.

Levitch said Monday that a second will has surfaced and that it was written in 1997.

The lawyer said that he hasn't looked at it and that it was given to the court for safekeeping. However, the 1997 document will have no bearing unless the later one is discredited, which the lawyers don't expect.