NEW YORK (CNN) -- A rarely seen portrait of Michael Jackson is on display inside a Harlem luxury car dealership. Macky Dancy, a partner at Dancy-Power Automotive, said the oil painting titled "The Book" is believed to be the only portrait for which Jackson sat. 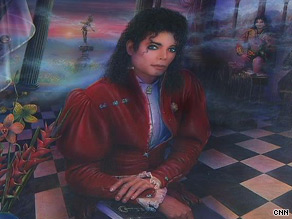 The oil painting titled "The Book" is on display at Dancy-Power Automotive in Harlem, New York.

A different portrait of the entertainer was among items auctioned from his Neverland Ranch in April. It is not clear whether Jackson sat for that painting.

The painting on display in Harlem belongs to Marty Abrams, a friend and customer of the owners of the high-profile dealership.

The 40-inch by 50-inch portrait, by Australian painter Brett Livingstone-Strong, sold for $2.1 million in 1990. Abrams acquired it as part of an unrelated business deal in 1992 and had it stored.

The painting shows Jackson sitting in Renaissance-era clothes and holding a book. Jackson sat for the portrait because he was a friend of Livingstone-Strong's.

The painting was unveiled at the Dancy-Power Automotive Group showroom on Thursday but was removed Friday because of crowd concerns. It returned to the showroom floor Monday morning.

Dancy said the painting's owner chose the showroom because it's near the Apollo Theater in Harlem, where the Jackson 5 won their first taste of fame by winning Amateur Night in 1967.

He said Abrams hopes the painting in some way can raise money for charities in the Harlem neighborhood. Dancy said Abrams is not necessarily interested in selling the portrait.

When news broke about the resurfacing of the painting, Dancy said, he received a phone call from representatives of Livingstone-Strong, the artist. Now, Dancy said, "We are in the middle of possibly putting together the artist with the painting again. Maybe for some auctions or charitable shows or something of the sort."

The showroom features Rolls-Royces, Ferraris and other pricey cars and is famous for its celebrity clientele.