LONDON, England (CNN) -- Michael Jackson fans who purchased tickets for his final concerts will receive a full refund or, if they chose, a commemorative ticket, the concert promoter said Tuesday. 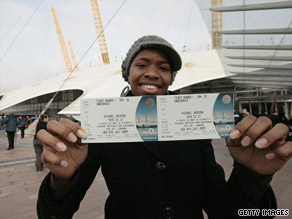 A fan shows off the first ticket bought at the O2 Centre in London for one of Michael Jackson's concerts.

"The world lost a kind soul who just happened to be the greatest entertainer the world has ever known," said Randy Phillips, president and chief executive officer of AEG Live.

"Since he loved his fans in life, it is incumbent upon us to treat them with the same reverence and respect after his death."

Fifty sold-out Jackson concerts were scheduled for the O2 Arena in London, starting July 13, with admission costing at least $105. The shows were billed as the final concerts of his career and were called "This Is It." Tell us what you think -- would you take the ticket or the refund?

Fans who decide they would rather have a souvenir will receive a ticket conceived by Jackson. There are eight designs that include holographic images of the entertainer on the front.

Images of the tickets will be available on michaeljacksonlive.com in coming days, according to the promoter.

Refunds will be processed by the issuing ticketing agencies -- See, Ticketline, Ticketmaster and Viagogo.

Billboard magazine has estimated that $85 million in tickets were sold for the concert series. Additional packages, merchandise and secondary market sales could have raised the total to $115 million. AEG Live declined to comment on the figures.

Jackson was expected to earn $50 million from the London shows.

He died Thursday in California after his doctor found him in bed not breathing, but with a slight pulse. Efforts to revive the 50-year-old singer failed and he was pronounced dead at a Los Angeles medical center.

All About Michael Jackson • London