Law firm: Jackson had slight pulse when doctor found him

LOS ANGELES, California (CNN) -- Michael Jackson's father says he is concerned about the last moments of his son's life and about the personal physician who found the pop icon unconscious at the singer's estate. 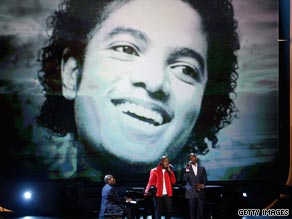 "I have a lot of concerns," Joe Jackson told CNN's Don Lemon on the red carpet leading up to the BET Awards ceremony Sunday night. "I can't get into that, but I don't like what happened."

Michael Jackson's personal physician, who was questioned extensively by investigators over the weekend, found the singer not breathing in bed when he entered the singer's estate last week, according to the law firm representing the doctor.

However, Jackson did have a slight pulse when Dr. Conrad Murray discovered him Thursday, and Murray tried to resuscitate the singer as he awaited paramedics, a representative with the law firm of Stradley, Chernoff and Alford law firm in Houston, Texas, told CNN Sunday.

Attorney Edward Chernoff is representing Murray. The law firm said reports that Murray injected Jackson with powerful painkillers, such as Demerol or Oxycontin, were false.

Funeral arrangements for Jackson were pending Sunday. "We haven't gotten to that yet -- we're working on that," Joe Jackson told CNN's Lemon.

Watch Joe Jackson talk about the death of his son »

"Detectives assigned to Robbery-Homicide Division met with Dr. Murray and conducted an extensive interview," a police statement said. "Dr. Murray was cooperative and provided information which will aid the investigation."

Jackson's family suspects that Murray can answer some lingering questions about the singer's last hours, but they have been unable to contact him, the Rev. Jesse Jackson said Saturday.

"The routine inquiry is now an investigation," Jesse Jackson said. "They (Jackson's family) didn't know the doctor. ... He should have met with the family, given them comfort on the last hours of their son."

McMillan said a will has not surfaced since Michael Jackson's death and that the singer's mother, Katherine Jackson, is seeking custody of his two children.

"Well, if there is no will, then under the state of California it goes to the next of kin. That's an adult to administer and oversee the best interests of the children and that would be Mr. and Mrs. Jackson," McMillan said. "And Katherine Jackson is the duly appointed person."

He added, "She will seek custody of the children. That's who Michael would have wanted to have the children, she loves them dearly."

On Saturday, the founder of 1-800-AUTOPSY, a private firm that conducts autopsies, told CNN that the Jackson family had contacted the business to inquire about possibly having a second autopsy done there.

Jesse Jackson added on Saturday that the family needed "an independent autopsy to get even more answers to questions that are now being driven by the gap between when Michael was last seen alive and was pronounced dead."iReport.com: Tributes pour in for Jackson

Michael Jackson was discovered unconscious Thursday by paramedics at his home, where Murray apparently had tried to revive him. He was rushed to a Los Angeles medical center, where he was pronounced dead.

An autopsy performed by a county medical examiner was inconclusive -- although officials said there were no indications of external trauma or foul play. The Los Angeles County coroner's office has said more tests are needed before a cause of death can be determined. That could take four to six weeks.

Detectives impounded Murray's car, which was parked at the singer's rented home, because, they said, it may contain evidence related to Jackson's death, possibly prescription medications. Police have released no information on what they may have found.

All About Michael Jackson • Jesse Jackson