Jacksons rely on strength of family

(CNN) -- There's a photo of the Jackson family on the cover of the September 24, 1971, issue of Life magazine. In it, Joseph and Katherine Jackson stand at the foot of a set of stairs, their star children -- known as the Jackson 5 -- arrayed behind them. 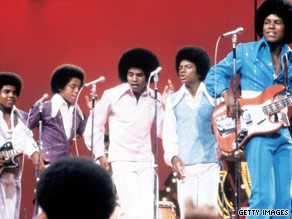 The Jackson brothers, here in the 1970s, were driven to be great by their father, Joseph.

They appear to be the all-American clan, gold records arranged behind them, the boys loose and smiling, the parents more awkward and serious in their demeanor.

Over the years, that façade crumbled. The brothers bickered; some made accusations of abuse. But the group remained tight-knit through crises, including Thursday's tragedy, when Michael Jackson collapsed at his house and later died at UCLA Medical Center.

The journey began with music in Gary, Indiana. Joseph Jackson, the patriarch, played in a short-lived band called the Falcons (no relation to the Detroit-based group featuring Wilson Pickett) in the 1950s. His primary job, however, was as a crane operator at U.S. Steel.

Katherine Jackson, the musical and devoutly religious woman who he married in 1949, tended to the couple's large family: Rebbie, Jackie, Tito, Jermaine, La Toya, Marlon, Michael and Randy, all born between 1950 and 1961. Daughter Janet arrived in 1966.

By that time, the three oldest boys -- Jackie, Tito and Jermaine -- had started their own group, which Marlon and Michael eventually joined. Joseph Jackson saw a chance for his sons to have the musical career he'd found elusive.

Joseph Jackson admitted being a harsh taskmaster. He drove his sons hard, forcing them to rehearse with a James Brown-like intensity. He wasn't above emphasizing his feelings to his seventh child, Michael.

"My father teased me and I just hated it and I cried every day," Michael told Oprah Winfrey in 1993. He said his father also beat him: "He was very strict, very hard, very stern. ... There's been times when he'd come to see me, I'd get sick, I'd start to regurgitate."

He quickly said, imagining his father's reaction, "Please don't be mad at me."

In a 2005 interview with CNN's Larry King, Jermaine defended his father's actions.

By 1968, when Michael turned 10, the Jackson 5 was a professional musical machine. They'd won an Apollo Theater talent night the previous year and were working the "chitlin circuit" of black clubs when producer Bobby Taylor urged Motown to sign the group. Motown founder Berry Gordy was impressed and made them "the last big stars to come off my assembly line," according to a biography on the Rock and Roll Hall of Fame Web site.

The group shot out of the gate with four No. 1 hits and gained a huge fan base, along with an animated TV show. But success took its toll, particularly when it wasn't so easy to come by.

In the mid-1970s, the band -- minus Jermaine, who'd married Gordy's daughter Hazel -- moved to Epic Records, where they were produced by the Philadelphia soul-funk team of Kenny Gamble and Leon Huff. The two remember nothing but good times from the sessions, which produced two albums and the Top 10 hit "Enjoy Yourself."

"It was a collaboration," Gamble said. "They all participated in creating. Tito was a great guitarist -- they were all great musicians."

Huff said he visited the Jackson compound during a trip to California and remembered a warm family setting, complete with a "fantastic meal" cooked by Katherine Jackson.

"I've got nothing but respect for the father," added Gamble. "He's a great man. He made something out of nothing."

Even during that era, however, Michael was standing out. Gamble and Huff recalled him taking a keen interest in recording technology and the way he sounded. Going solo with Quincy Jones producing, as he did in 1979, was the right move, Gamble and Huff said.

The family dynamics kept changing as the siblings grew older. After Michael's "Thriller" became the biggest album of all time, the brothers -- including Jermaine -- regrouped for a new album, "Victory," and accompanying tour. But Michael, now the undisputed draw, disagreed with some of the tour plans and ended up donating his earnings to charity.

Michael's brightened spotlight boosted the careers of his siblings; even Rebbie had a hit. But it was Janet who broke out with the most success, including the No. 1 singles "Miss You Much," "Black Cat" and "Again" in the 1980s and '90s.

With the increased interest in the Jacksons came tabloid scrutiny of the family's every move. When La Toya appeared nude in Playboy magazine, the story made headlines. She later criticized Michael and was on the outs for several years.

Jermaine put out a song called "Word to the Badd," an attack on Michael, in 1991; he later changed the lyrics. Janet's relationships were probed in detail, as were the brothers' marriages.

And Michael, of course, was seen as increasingly eccentric, his personality overwhelming his music.

But for all their own bickering, the family closed ranks when a member was attacked. In 1992, Jermaine co-produced "The Jacksons: An American Dream," a TV miniseries based on Katherine Jackson's memoir, which chronicled their rise to stardom. When Michael faced molestation allegations in the early '90s and was tried in 2005, the family rallied around.

"The Jackson family was groomed to be a team," said Linda Johnson Rice, president and CEO of Ebony and Jet magazines' Johnson Publishing and a longtime family friend. "As you can see through their performances, they were always there for each other."

In recent years, La Toya has appeared on the reality shows "Armed and Famous" and the UK "Celebrity Big Brother." She originally had a scene in the forthcoming Sacha Baron Cohen movie, "Bruno," but CNN confirmed the scene has been cut, "out of respect for Jackson's family," the studio told The (UK) Guardian.

Jermaine, who converted to Islam and changed his name to Muhammad Abdul-Aziz, appeared on "Celebrity Big Brother" in 2007. Jackie runs a record label, Tito remains involved in the music business, and according to a 2008 article in the New York Post, Marlon and Randy have struggled financially.

In the hospital emergency room Thursday, Randy and Jermaine were witnessed hugging and crying over their late brother.

"We're a family," Jermaine told Larry King in the 2005 interview. "We're no different than any other family who has feuds and problems. ... But at the same time, we're united, and we have a united front that is very, very strong, and it's supported by God.

"My mother and father did a great job in instilling the morals and principles in us from the very beginning. We feel that with that, that's all you need to go through life."