(CNN) -- Stars at the legendary Glastonbury, one of the world's largest music festivals, have begun to pay tribute to Michael Jackson, who died Thursday. 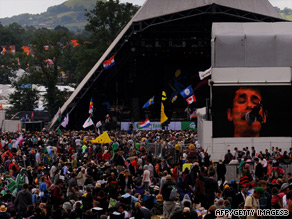 Glastonbury at Worthy Farm in Somerset is the world's largest music festival.

"The music was so incredible and what he and Quincy Jones did was change music and the way people looked at music," Williams was quoted as saying on the BBC's Glastonbury Web site.

Teenage Australian singer Gabriella Cilmi was the first artist at the festival to pay tribute to Jackson, Friday, singing a few bars of song "Billie Jean" during her set.

Organizer Emily Eavis wrote on her Twitter site: "So sad to hear the news about MJ. There will be tributes all over the site all weekend.

Other artists are expected to honor the singer, who died of a cardiac arrest at the age of 50, throughout the 3-day festival weekend in southwestern England.

Festival-goers woke to an unexpectedly somber first day of Glastonbury, Friday, as the news of Jackson's death began to sink in.

Rumors of the singer's death had circulated the isolated 900-acre site the previous evening, but many fans had dismissed them as the hearsay and misinformation that thrives each year in the site which has no TV or Internet-access.

Confusion quickly turned to shock for many, as Jackson's music played in festival bars and news of his demise spread by cell phone.

With a laid-back focus on mainly alternative music, the Glastonbury festival -- expected to attract as many as 137,000 music-lovers -- is not a venue where people would normally expect to hear Jackson's music.

But few here deny the singer's influence. An impromptu memorial was held by mourning fans late Thursday at the "Stone Circle," a neolithic monument in the festival's grounds.

Other headline acts such as Bruce Springsteen, Lady GaGa and Lily Allen, performing at the festival, are expected to pay tribute to Jackson. iReport: Share your memories of Michael Jackson

Anouk Lorie contributed to this report