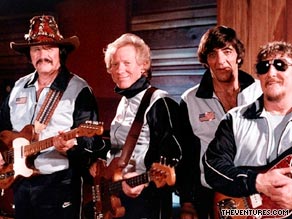 The cause was non-Hodgkin's lymphoma, according to Don Wilson, who co-founded the Ventures with Bogle in the 1950s.

"He had a special sound that nobody could ever re-create. He was totally unique as a guitar player," Wilson told CNNRadio.

Wilson and Bogle learned how to play guitar while working as construction workers in the 1950s in their native Tacoma, Washington. The pair formed the Ventures in 1958.

"We had a lot of time on our hands after work, so we'd get together and play," Wilson recalled. "A year and a half later, we had a number two hit called 'Walk -- Don't Run.' " The group first heard the song on a Chet Atkins record.

Several other hits followed, including "Perfidia," "Walk Don't Run '64" and "Diamond Head." The group took the theme of the TV show "Hawaii Five-O" into the Top Ten in 1969 and later supplied background music for the series.

But the band, which played almost solely instrumentals, was perhaps more influential for its albums. Thirty-eight of the band's long-players hit Billboard's Top 200 chart, including albums that covered country songs, dance tunes and Christmas melodies. One of the band's albums was titled "Play Guitar with the Ventures," and countless did.

"I can't think of a better contribution for instrumental music on his style than 'Walk -- Don't Run,' " Wilson said. "A lot of good would-be guitar players and garage bands would go out and buy guitars just to learn that song."

The Ventures were voted into the Rock and Roll Hall of Fame in 2008. At the induction ceremony, Creedence Clearwater Revival's John Fogerty praised the group: "It's enough to say, the Ventures are the most popular instrumental band of all time," he said.

"His doctors gave him 10 years to live, and he lived 12. The last two years were really tough. At least he lived to know the Ventures had been inducted into the Rock and Roll Hall of Fame."

Bogle is survived by his wife, Yumi.

CNNRadio's Ninette Sosa and Matt Cherry contributed to this story.