Mandy Moore makes a new name for herself

LOS ANGELES, California (CNN) -- Mandy Moore stepped onto the small stage at Amoeba Records in Hollywood with a quick wave. 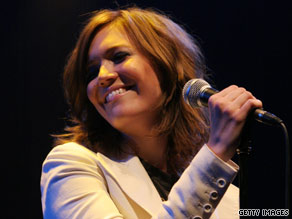 Mandy Moore, now 25, is following her bliss with her new album, "Amanda Leigh."

The audience of several hundred, stuffed between the music racks at the landmark store, giggled back.

"This is so weird to be playing here. I live in the neighborhood, and this is where I get my CDs and my DVDs!" she said. Then she launched into selections from her sixth studio album, "Amanda Leigh."

Somewhere out of sight was her new husband, Ryan Adams -- the alt-country hero she married in March, after a one-month engagement.

It's been 10 years since Moore burst onto the pop scene as a lanky, blonde 15-year-old singing and dancing her way through a sweetly suggestive tune called "Candy." Her musical fare now is more eclectic and stripped down -- even featuring vintage instruments such as the clavinet and melodica.

Unlike such early contemporaries as Britney Spears and Jessica Simpson, Moore has gone for cred over commercial success in both her music and movie careers, and it suits her well. There's an authenticity there, as well as a genuine warmth and charm.

Moore spoke about her artistic growth, a musical funk, and working with her new husband. The following is an edited version of the interview.

CNN: A friend of mine made an interesting analogy, saying these last two albums of yours (including 2007's folk-leaning "Wild Hope") are to your music career what "Saved!" was to your movie career, in terms of establishing yourself critically.

Mandy Moore: I take that as a compliment. I mean, I sort of feel lucky to have the opportunity to do film stuff and music at the same time, because I love doing both. But ... if you make a move one way with one side of your career, you sort of have to balance it out on the other side.

I feel like with the last two records, I have been in control creatively. They are probably more like some of the cooler indie movies that I have been lucky enough to get to do.

CNN: You could have continued in the mainstream pop world, like some of the singers you came up with.

Moore: I sort of started around the same time as a lot of my contemporaries, like the Britney Spearses and the Christina Aguileras of the world, and they are amazing and everybody is still around and doing their thing. I just never truly felt comfortable with the music that I was singing -- even back then. I mean, I was happy to have the opportunity, but I was still scratching my head, "Well, there has got to be something else, there has got to be something more." ...

It's just about doing what you are truly passionate about and fighting for that. I could have stayed on the same path that I started on, and who knows what would have happened if I would have found success with that -- or none at all -- but I knew I would not have been happy if I had made that decision. And I'm doing what I love now, and I think that's more important than anything.

CNN: The new album is called "Amanda Leigh," which is your real name. So is this kind of a reintroduction to people about who you really are -- a grown-up Mandy Moore?

Moore: To be quite honest, even though the record is called "Amanda Leigh," and that is my given name, there wasn't a tremendous amount of thought behind the idea of "This is the real me. Forget the Mandy Moore stuff. That's kid stuff." No, it was kind of a simple, almost frivolous decision.

My friend Mike Viola [of the Candy Butchers], who I wrote the whole record with, called me Amanda Leigh when we were in the studio all the time. Like "Amanda Leigh, come on, we've got to get to work!" And I don't know, it just sort of became synonymous with making the record to me. I had never really owned my name. It was just synonymous with my parents being mad at me. So I was like, "All right, I'm 25, I'm a woman, I'm an adult. I think I can probably take ownership with that name now and be OK with it." But I'm still happy to be Mandy at the end of the day.

CNN: Well, you can actually change your name even further. You can go by Amanda Adams [her married name] these days.

Moore: I'm going to really throw people off and completely change my name. That will be the next record. You know, just to throw a real wrench into the situation.

CNN: I'm probably blowing it for you when you check into hotels under names that nobody would expect you to use.

Moore: (Glancing over at her husband) Should I give my name? I'll have to change it, but it's time for a new one. I was Cornish Gamehen for a while, which was bizarre. But for the last couple years, I have been Meryl Inch -- however, there is too much of a debacle going on there these days to continue that. So I have to come up with something creative.

CNN: What's it like to not be on a major label these days? There must be some freedom attached to it, but then you don't have the big bucks behind you, as well as the whole machinery.

Moore: I don't think you need the whole machine, the whole middleman behind you nowadays, like in terms of a big record label giving you a push. ...

I think it has allowed me the creative freedom to truly make the kind of music that I want to by being on an indie label. ... I'm much happier with this road.

CNN: Was there a period of depression you went through that had you reworking things in your head, and trying to find out who you were?

Moore: I think the writing process for the last record, for "Wild Hope," I found myself in a bit of a funk. I don't know if I would necessarily classify it as a depression, but I was definitely in a very deeply, darkly place for me, and I had never really been there before. And there was a lot of investigation and questions bouncing around in my head that I found I could answer by kind of investing myself in music and writing.

CNN: I would love to be a fly on the wall in your house, just to see the music that you and Ryan come up with.

Moore: There is a lot of music in the house, whether someone is playing it, or there's a record on or something. I've been introduced to a lot of metal in my relationship, which is pretty cool, because my guy is a big metal fan, and it isn't something I would necessarily investigate on my own -- but I do like it. It's just nice to have that truly built-in support system that someone is unbelievably understanding of what you do.

CNN: Like a lot of people, I was shocked when I read you and Ryan had gotten married.

Moore: Yeah, we sort of snuck it by a lot of people. Pretty handy. That's how we roll. Life is good, and I'm a really lucky girl, and I'm very happy. It's a very exciting time to be 25 years old and truly fulfilled in so many aspects.