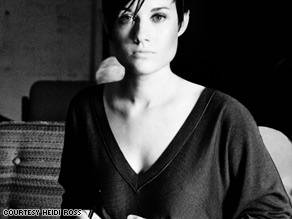 Butterfly Boucher relies on encouragement from fans to fuel her determination.

"It's my real name," the singer-songwriter said. "It's on my passport and everything. The first question [people usually ask] is, 'Is that your real name?' The second question is, 'Were your parents hippies?' "

"They were kind of hippies. They were just very creative types."

Born in Adelaide, Australia, Butterfly Boucher (rhymes with "voucher") is the middle of seven sisters and spent much of her childhood moving cities with her family in a motor home. And yes, some of her siblings have equally free-spirited names.

"My eldest sister, Rebecca, came home crying after her first day of school because there were two other Rebeccas in the class," she said. "So at that point, Mom and Dad were like, 'OK, next time we're going to come up with something really original.' So the next sister was Sunshine -- I think that's more hippie than Butterfly -- and then me and then Eden, Angel and Harmony."

Although she's happy to hear you say her name is a little quirky, the 29-year-old may cringe if you label her music as such. Boucher released her debut album, "Another White Dash," on A&M Records in 2003 but says she was given the runaround when it came to her sophomore release.

"They say [my music] is too quirky. They always say it's too pop for the indie scene and too indie for the pop scene."

Watch (and listen) to some of Boucher's sounds »

After parting ways with her record label and having been allowed to keep the masters of her newer work, Boucher is going the independent route and will release the album June 2 on her own imprint. Called "Scary Fragile," Boucher says, it was completed more than three years ago. She's determined to get it out there in spite of the challenges that come with being a DIY artist.

"The funding is my bank account, and it's not a very big bank account," she said. "But I love working, and I work hard. It's a lot easier to work hard when there's a vision and there's a good group of people behind you."

Constant encouragement from fans -- via her MySpace and Facebook pages -- has fueled her determination. She's also gotten some breaks: "Grey's Anatomy" has used several of Boucher's songs. She performed as the opening act on Sarah McLachlan's "Afterglow" tour, and she shared the vocal work with David Bowie on a cover of his hit song "Changes" for the "Shrek 2" movie soundtrack.

And in a show of support, fellow Aussie Nicole Kidman recently showed up at one of Boucher's gigs in Nashville, Tennessee, where Boucher now lives.

Currently on a mini tour of the United States, Butterfly Boucher fluttered (sorry) into CNN this week to talk about heartache, grand pianos and nicknames.

Butterfly Boucher: It does, yeah. I'm out of the cocoon, definitely, and I'm glad!

I do I feel like I've had to grow into the name. Occasionally ... I catch it and I'm like, "Butterfly! That's ridiculous! What kind of a name is that?" Actually most of my friends call me Butter or Butters.

CNN: How was music a part of your upbringing in Australia?

Boucher: It was a huge part of my life growing up. My dad was a musician; he was a rock 'n' roller-songwriter kind of guy. So it's definitely in my blood.

I ... remember lying under a grand piano and just listening to [my dad and his friends] record in the other room and just loving this big black shiny piano, just the whole concept of music. I was in dreamland.

CNN: One of the standout lines from this past season of "American Idol" was when the judge Kara DioGuardi said the music business is paved with heartache. Do you agree with that sentiment?

Boucher: Absolutely. ... Artists tend to be kind of emotional people. If it's good art, it should come from your soul, and it's coming from an emotional part of you. So it is very hard. Over the years, I've learned to balance the business side with the passionate artist side, because you just get too hurt. You take everything too personally, and sometimes you've got to make decisions that you're going to compromise things.

I get depressed, but then you've gotta get through it. The things that get you through are my fans and the whole generation of MySpace and Facebook. Every day I'm getting just little comments like "your music means so much to me." Every day I get that, so it's a constant encouragement from fans and new people that are discovering you. I have got it pretty good.

CNN: Why did you call your album "Scary Fragile?"

Boucher: It was just a song title of one of the songs. ... There was no real deep reason behind it. I just liked that song, and I thought none of the other song titles sounded like an album. For a while I was calling it "Just Because," and that was kind of lame.

I don't want to be too deep with my album titles. I just want it to be catchy and something that you'll remember and then let the music and the lyrics do the rest of it.

Boucher: Ah, Nashville! I've been there for about 10 years. In the last few years, it's changed a lot. There are a lot of new people coming in. It helps that people like Jack White are embracing it, and Sheryl Crow. There are so many artists that secretly have a place there.

And it's just this great music city. There are more venues, more coffee shops. There are new collaborations, and everybody's idea of what a good song is is changing, which I think is healthy for Nashville. I love it.

CNN: What do you miss most about Australia?

Sometimes I miss the smell of Australia. Although if you go to L.A. you can get it because they have a lot of eucalyptus trees there. So when it rains, it smells a bit like Australia.

All About Music • Nashville