NEW ORLEANS, Louisiana (CNN) -- The 90-year-old performer is one of many featured at this year's New Orleans Jazz and Heritage Festival. Under blue skies on the main stage, with his grandson by his side, they close the set with the Woody Guthrie classic "This Land Is Your Land." 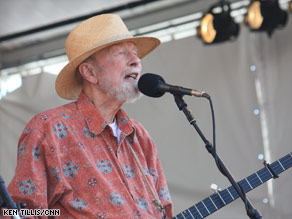 Pete Seeger performs on the Acura stage at the New Orleans Jazz and Heritage Festival.

The voice isn't what it used to be, but the message is still as strong as ever. It was hard to tell who enjoyed the performance more -- Pete Seeger or the crowd.

CNN sat down with the folk singer and his grandson, musician Tao Rodriguez-Seeger, to talk about the 40th annual Jazz Fest, Preservation Hall and the generations Seeger has influenced. The following is a edited version of that interview.

CNN: What's it like coming here to Jazz Fest again, playing in the 40th anniversary, and seeing this crowd that loves you so much?

Pete Seeger: Well first of all, I think it's a fantastic job they've done here. Forty years, forty years. That's a tremendous achievement. And to keep it going year after year with new things and old things tangled up together.

CNN: And you got to go to Preservation Hall and record three tracks yesterday with that phenomenal band. What was that experience like?

CNN: Well, I think a lot of people would say that you two are history. I'm sure it was just a real honor for the band to be there as well.

And it just sounded so good. It was just this upbeat, party-tempo "We Shall Overcome" like I have never heard before.

And I feel like you only find this kind of thing in New Orleans. I love that you can combine a deep old meaningful spiritual with these kinds of carnival approaches to music.

Like Emma Goldman said: If I can't dance, I don't want to be part of your revolution. (laughs) And I just think here in New Orleans, we still have those traditions going.

CNN: You must still get a thrill every time you go on stage with your grandfather.

Rodriguez-Seeger: I do, yes. He doesn't ever do the same thing twice. We were writing up a set list in the back, and he strayed from it as he usually does. It's good; it keeps me on my toes. I have learned a lot from him.

CNN: You are such a humble person, but just talking to the people who are here to perform, you mean so much to them. So many of them learned at your feet, either literally or figuratively. What does that mean to you?

Seeger: I come from a family of teachers, and I was looking for a job on a newspaper and not getting one.

I had an aunt who said, "Peter, I can get five dollars for you if you come and sing some of your songs in my class." Five dollars? In 1939, you would have to work all day or two days to make five dollars. It seemed like stealing.

CNN: How important is it to have storytelling out there in this day in age?

Seeger: There's always a danger that you let the machine do it for you. And I think what we are going to see in the next few years, is people finding a way they can do something themselves. Whatever it is.

All About Jazz and Blues • New Orleans • Music Festivals