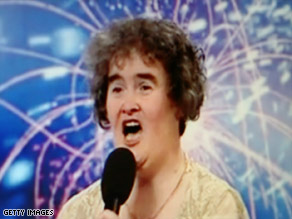 Peter Bregman says we prejudged Susan Boyle by her looks and were fooled.

In case you've missed it, she's a 47-year-old unemployed charity worker who lives with her cat in a small village in Scotland.

As soon as she walked on stage, the audience began to snicker and roll their eyes. Simon Cowell, the show's host, asked her some pre-performance questions in his famously condescending style, and to the audience's enjoyment, she answered awkwardly.

She was painfully ordinary, and everyone was prepared, looking forward even, to see her fail.

By now, if you don't know the story, you could guess it, right? She more than wowed them. She opened her mouth to sing, and, as judge Piers Morgan later said, she had "the voice of an angel."

She wasn't painfully ordinary; she was amazingly extraordinary. The audience immediately jumped to a standing ovation and stayed there until the end of the song. The YouTube video of Susan's performance has, as of Tuesday, received more than 35 million views.

We are riveted, and a recent article in USA Today does a good job of cataloguing all the reasons. We prejudged her by her looks and were fooled. We experienced the gamut of emotions in a few short moments: guilt, shame, vindication, hope. She's a modern-day Cinderella, and these days, it's a wonderful distraction and inspiration to witness the triumph of the human spirit.

But there's something else Susan Boyle awakens in us as we watch her come out of her shell: our own selves. Who among us does not move through life with the hidden sense, maybe even quiet desperation, that we are destined for more? That underneath our ordinary exterior lies an extraordinary soul? That given the right opportunity, the right stage, the right audience, we would shine as the stars we truly are?

That promise underlies most successful advertising campaigns: the desire to transform from caterpillar to butterfly. Maybe if you buy that (fill in the blank), people will see you for the sophisticated, cool, gorgeous, talented, lovable person you know you really are.

It's easy to admire Susan. But it's far more interesting to be transformed by her. "There is grace," a friend recently wrote to me, "in being molded by your own gifts."

To allow yourself to be molded by your own gifts takes courage. You have to be willing to stand there, exposed and authentic, while the audience rolls their eyes at you and sneers, expecting failure. And then, of course, you have to fail, laugh or cry, and keep going until, one day, they stop laughing and start clapping.

But you can't do it alone. Susan Boyle didn't; she had a voice coach, Fred O'Neil, who worked with her for years and encouraged her to audition. And she had her mother.

"She was the one who said I should enter 'Britain's Got Talent.' We used to watch it together," Boyle told the British paper The Times of her mother, who died in 2007, "She thought I would win. ... I am doing it as a tribute to my mum, and I think she would be very proud."

If we're lucky, we have parents who encourage us. Nothing really replaces a mother or father who believes in you. But even if you don't have parents who believe in you, it's important to have someone. Someone you trust, enough that when they offer criticism, you know it's to draw you out more fully, not shut you down even partially. iReport.com: Have you been judged on looks?

And a good supporting friend even sees through the talent, right through to you. With her mother gone, Boyle still has O'Neil. And recently he said to The Telegraph that he was worried all this attention was obscuring "the real person" he knew.

"I am concerned about her being surrounded by all these PR people," he said, "that she will not be given the time to sing."

All About Susan Boyle