(CNN) -- Don Henley, a founding member of "The Eagles," is suing a Republican candidate for the U.S. Senate, claiming the candidate is misusing two of his popular songs. 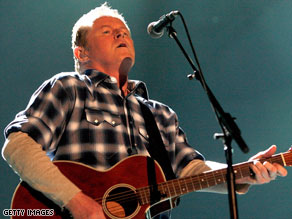 Don Henley performs at the Stagecoach Country Music Festival on May 2, 2008.

The suit filed Friday in federal court in California claims Charles DeVore is using Henley's hit songs "The Boys of Summer" and "All She Wants to Do Is Dance" without authorization.

The suit comes from two campaign videos that DeVore posted on YouTube that used Henley's music, according to the lawsuit.

In one of the videos, DeVore's campaign changed the words of "All She Wants to Do Is Dance" to lyrics that attacked Sen. Barbara Boxer, the lawsuit alleges.

Mike Campbell, who co-wrote "Boys of Summer," is also named as a plaintiff in the lawsuit.

"Don Henley and Mike Campbell brought this action to protect their song, 'The Boys of Summer,' which was taken and used without their permission," Henley's spokesman said. "The infringers have vowed to continue exploiting this and other copyrighted works, as it suits them, to further their own ambitions and agenda. It was necessary to file a lawsuit to stop them."

DeVore, a member of the California State Assembly, is running against Boxer, a Democrat, in the 2010 election, according to his Web site.

"We're responding with a counter-claim, asserting our First Amendment right to political free speech," the site said. "While the legal issues play out, it's time to up the ante on Mr. Henley's liberal goon tactics. By popular request, I have penned the words to our new parody song."

DeVore then posted the lyrics of a song he called "All She Wants to Do Is Tax."

All About Don Henley • Barbara Boxer