Spinal Tap takes off the wigs

(CNN) -- Twenty-five years ago, America discovered "one of England's loudest bands," courtesy of documentarian Marty DiBergi and his film, "This Is Spinal Tap." 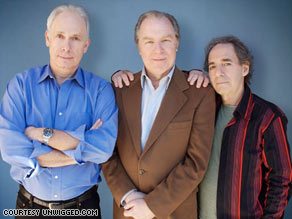 It was all parody -- DiBergi was director Rob Reiner, and cohorts Christopher Guest, Michael McKean and Harry Shearer played the heavy-metal musicians in Spinal Tap -- but for a fictional band, Spinal Tap has had a long afterlife.

The film gave birth to several catchphrases, including one -- "up to 11" -- that's made it into the Shorter Oxford English Dictionary.

There are Web sites devoted to the Tap, including at least one, http://tap-albums.s5.com/, that offers a complete discography of the fictional band's nonexistent albums.

And Guest, McKean and Shearer have never left their spandexed alter egos behind. The band reunited for a 1992 album, "Break Like the Wind," and again for a 2001 tour. For the latter, the opening act was another Guest-McKean-Shearer collaboration, the Folksmen from Guest's film "A Mighty Wind."

Now Shearer, McKean and Guest are hitting the road again, but not as Spinal Tap or the Folksmen. They're playing ... themselves.

"We're trying very hard to get across the idea that this is us, and only us," says Shearer in a phone interview discussing the trio's "Unwigged & Unplugged" 30-date acoustic tour, which kicks off Friday in Vancouver, British Columbia. "And because we don't often appear as ourselves -- because we most often appear as characters -- we're trying to dress it up as a treat, a rare treat, to see us as ourselves."

The group will be performing both Spinal Tap and Folksmen songs, though, Shearer adds, "[we'll be] doing these songs kind of in a different way because we're approaching them as ourselves and not as these characters."

Have no fear, however, Tap fans: A new album, "Back from the Dead," is due out in June.

Shearer took some time out from tour preparations to talk about Spinal Tap's origins, the similarities between Tap and Metallica, and how "Start Me Up" became more closely identified with the Folksmen than the Rolling Stones. The following is an edited version of that interview.

CNN: It's been 25 years since "This Is Spinal Tap," but it's been much longer since Spinal Tap came together. Do you remember what brought it about -- and who it's based on?

Shearer: You know, I would like to make a little book composed of all the bands that people have guessed Spinal Tap actually is -- there would be a lot of bands in there. And in fact it is about a lot of bands -- it's never been about one band.

When we did this, the Pythons had already done [the Beatles parody] the Rutles, so there had been a piece that ... was a really specific spoof of a really specific band. That was something we didn't want to do -- that had been done. Our notion was to ... sort of encapsulate everything we know about rock 'n' roll -- and everything we found funny or amusing about bands -- into one band. So it was a process of smooshing all that stuff into this fictional band.

CNN: Are you familiar about this new movie called "Anvil"? [The documentary, about a real heavy-metal band, has been compared to "This Is Spinal Tap."]

Shearer: I've been reading about it and hearing about it a lot, but I haven't seen it. ... It sounds interesting. The last thing I've seen along that line was "Some Kind of Monster." ... Was that amazing. That was stupefying. ...

I heard they had a therapist. But it wasn't really a therapist -- it was a life coach. Which is different -- and worse (laughs). Even more humiliating. It's one thing to have somebody who's a therapist, but ... did you ever see "Starting Over"? The daytime series on NBC?

Shearer: Oh, four or five women in a house with two life coaches. Oh my God, it was just shocking. Well, "Some Kind of Monster" is in that vein.

CNN: How do you guys go about writing songs? The songs on the first album were wonderful pastiches of various heavy metal-type things. On the second album you had more styles and brought in guest musicians, including [renowned session pianist] Nicky Hopkins for "Rainy Day Sun."

Shearer: My God, yeah. Nicky had actually come in, I think, to audition for the movie but couldn't do the movie or something, but we'd always dreamed to work with Nicky.

How we write the songs -- ... every one is a different experience. In the case of Tap, it's what seems like a funny idea sort of leads to a riff or some lyrics. In the case of the Folksmen, I think there was more -- at least the stuff Michael and I wrote together -- a sense these certain kinds of songs that became clichés in that era of folk music, and we sort of have to touch each of these bases.

CNN: Like "Blood on the Coal," a combination of coal mining and train song.

Shearer: Yeah! We saved you the time. It was a twofer. ... There were a lot of songs in that era that were kind of based loosely or less loosely on the Bible, so we wrote "The Good Book Song," and then of course the great cliché of folk music is the rambler or wandering song, so we wrote "Never Did No Wanderin'," about a guy who just stayed home.

CNN: Since you're going to be performing as you, are you worried that people will show up wondering where the costumes are, or perhaps yell out, "Hey Harry, I want to hear Smithers," or "Hey Chris, do Harlan Pepper"?

Shearer: Each seat will be [affixed] with Taser equipment to discourage that. ...

Hopefully, we'll be so entrancing that they won't be even thinking of talking to us, except if we ask for questions. But as to what people are expecting, we're trying very hard to get across the idea that this is us, and only us, and because we don't often appear as ourselves -- because we most often appear as characters -- we're trying to dress it up as a treat, a rare treat, to see us as ourselves and doing these songs kind of in a different way, because we're approaching them as ourselves and not as these characters.

CNN: Are you planning to do covers on the order of "Start Me Up"? [The Folksmen covered the Rolling Stones song on the "Mighty Wind" soundtrack.]

Shearer: "Start Me Up" is actually the only song that we didn't write that's in the show. I can't resist [it] -- none of us can -- but I have a personal affection for it.

After the Super Bowl a few years ago in Detroit, where the Stones played halftime, a few weeks later I met somebody who said that "the soundtrack record of 'A Mighty Wind' is my 6-year-old son's favorite CD, and at the Super Bowl that day during halftime, I was in the kitchen making lunch for him and his sister, and the 6-year-old ran into the kitchen as excited as I'd ever seen him in his life and said, 'Daddy daddy daddy, they're doing a Folksmen song on the Super Bowl!' "

All About Monty Python • The Rolling Stones