Carlos Santana: Legalize pot, get back to spirit

LOS ANGELES, California (CNN) -- Whenever you speak with Carlos Santana, you pretty much know what you're going to get: lots of talk about love and light. spiritual analogies, name-dropping of people like Marvin Gaye and Mother Teresa. 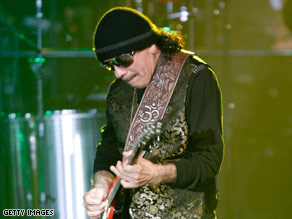 Carlos Santana will start a 72-show residency in Las Vegas in May at the Hard Rock Hotel and Casino.

It may take a moment to enter the humble headspace of the 61-year-old guitarist legend, but once you're there, you realize that this is a man who acts with his heart instead of his head.

Somehow, he's managing to live out his 1960s ideals in 2009 -- and he wants fans to experience a piece of that with his new Las Vegas, Nevada, show, "Supernatural Santana: A Trip Through the Hits." The 72-show residency at the Hard Rock Hotel and Casino launches May 27, with 36 concerts this year and 36 in 2010.

As with all his events, a portion of the cost of each ticket will be donated to the Milagro Foundation, the charitable organization founded by Santana and his family to benefit children around the world.

Watch Santana get into the groove »

Santana talked to CNN about the Vegas show and his beliefs. The following is an edited version of that interview.

CNN: Your Vegas show sounds like it's your greatest hits mixed with a little bit of Carlos Santana spirituality.

Carlos Santana: They're inseparable at this point. We're very different than a lot of bands. A lot of bands concentrate on show business and entertainment. We focus on light and touching people's hearts.

We really believe that by coming to Las Vegas, it gives us an opportunity to take ourselves and the people who come to listen to us into a place where people are free from thinking they're sinners or unworthy. There's something really wonderful about music when music makes men and women dance, laugh and cry at the same time, because they're receiving like a Holy Ghost thing.

Santana: I have no clue about that. I'm more with, "This finger goes onto this note and it makes juicy sounds, and I'm going to make people dance and laugh." It's not like I don't care or I'm ignorant. It's just that I'm not wired to have that insignificance on me other than what I'm going to get to give back to other people.

And other than that, I trust that the people around me -- which is my sister and my brother-in-law -- will take care of all of those dimensions. We don't like to gouge people, but we do like to be realistic that you do need to pay the rent ... and stuff like that. But other than that, since I was a child, I really don't put that much focus or significance into it.

Santana: They're already there. They're washing dishes and folding sheets -- I'm serious. The Latin community is there. It's just that we don't see them. ...

I don't belong to just Latinos just because I speak Spanish. We go to Ireland, and if we go to Pakistan, or Istanbul or Malaysia, we're part of the family. We just did a tour in South America, and I have never seen so many children come to our concerts in my life -- and I've been doing this since '67.

CNN: You were born in Mexico, and President Obama will be heading there to talk about the war on drugs. [Secretary of State] Hillary Clinton recently made some remarks that United States drug consumption is partially to blame for this problem. Do you agree with that?

Santana: Totally. I think that the solution to all of this stuff would be to legalize it, decriminalize it, reinvest all that money into teachers in schools. ...

To go back to the question -- I think we should legalize marijuana. I think Barack Obama should bring the brothers and sisters home -- the soldiers. If I was to see him, I would go, "Listen to Marvin Gaye's 'What's Going On' and John Coltrane, and bring the boys home from the war now, like we did with Vietnam." They're not going to come here. People in Vietnam did not come here to attack us after we left them alone. So let's get rid of that fear, that fantasy, that stuff. Let's get rid of the bogeyman, because the bogeyman is us looking in the mirror of each other.

CNN: What about when people don't get it, Carlos? What if they're listening to you and thinking, "He sounds like one of those New Age Californians, and I really don't get what they're doing out there."

Santana: Well, they don't get it because they're stuck in something that is not working. Like, for example, a lot of people are stuck with certain parts of the Bible, believing that God is vengeful and jealous. That's Godzilla! I'm not stuck with a God like that. I'm stuck with a God that's all love, all compassion, all light, and he only sees you with purity and innocence, like the brand-new eyes of a child that's just been born. ...

A lot about Las Vegas is illusion. It's entertainment and show business. We don't know none of that. We only know to go into your heart and help you remember that it's there. I know a lot of rich millionaires who are not happy, and you're only happy when you're doing something.

CNN: Are you happy?

Santana: I'm very, very happy because I'm grateful. My priorities finally have been crystallized. I started washing dishes, and now I do this. And this is a lot of fun.